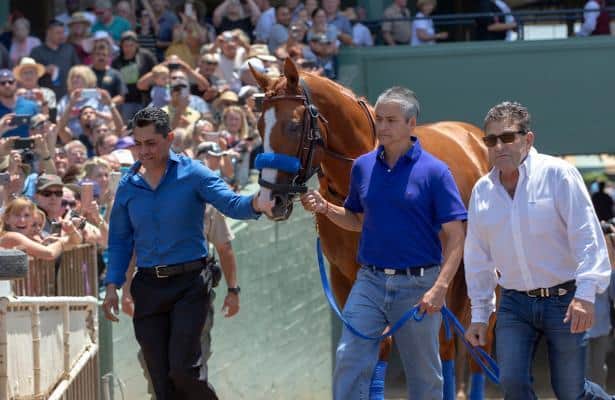 Basking in the afterglow of rock star treatment accorded Saturday to Justify at Santa Anita Park, trainer Bob Baffert was back on the beat Sunday morning, the throes of the Triple Crown sweep and its accompanying commitments standing in bold relief.

“I finally slept,” Baffert said. “I thought it was pretty cool. Everybody really enjoyed him and they had a good crowd,” the Hall of Famer said of Justify, who paraded before fans prior to Baffert fielding a myriad of questions from the media.

“Mike Smith signed all those autographs (on posters depicting Justify’s victories in the Kentucky Derby, Preakness and Belmont Stakes). He must have signed 3,500 or something like that.”

As for Justify, Baffert is on record as saying he won’t publicly commit to the undefeated son of the late Scat Daddy’s next race until the chestnut colt has his first workout since winning the Belmont on June 9. He held firm on that Sunday.

Presently at his home base of Santa Anita, Baffert ultimately will head to Del Mar for the meet that starts July 18, and Justify “will go with me, wherever I go.”