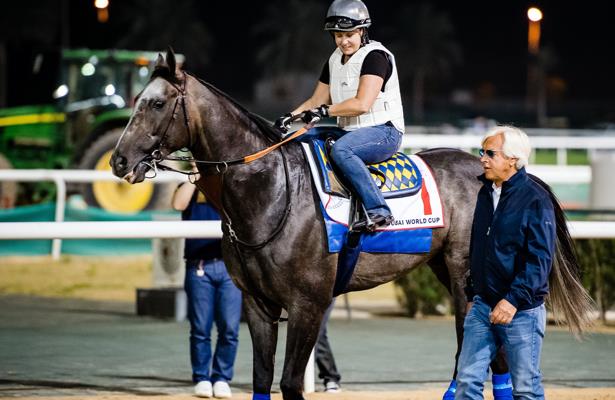 In the minutes after Arrogate’s last-to-first victory in the 2017 Dubai World Cup, trainer Bob Baffert commented that “this is the greatest horse we have seen since Secretariat.”

Three years later, after the untimely death Tuesday of the champion son of Unbridled’s song, Baffert continued the comparison with a horse that went on to lose his final three starts — but on his best days had no modern day equals.

"I would've thrown Arrogate against that horse," Baffert told the Associated Press of Secretariat. "I would never say that at the time — it's sacrilegious — but believe me, he was that kind of horse.”

Arrogate, of course, began his incredible roll by winning the 2016 Travers (G1) in record time, then defeated Horse of the Year California Chrome in the Breeders’ Cup Classic. Having scored in the inaugural Pegasus World Cup (G1) the following January, Arrogate finished his run with a stirring victory in Dubai after getting left at the jump.

Upon returning to the U.S., Arrogate lost his remaining three races, all at Del Mar. Baffert told the AP when looking back that the star colt “just didn’t want to run.”

That finish to Arrogate’s career didn’t dull feelings after Juddmonte Farms, which campaigned the gray and stood him at stud, announced the horse had to be euthanized after a four-day fight, unable to stand in his stall.

“It is still unclear what the illness was and a post-mortem is currently being carried out,” Juddmonte’s statement reads. “…When serious secondary health issues set in, the decision was made to put him to sleep.”

"It takes a lot to make me cry, but I cried (Tuesday) morning when I heard the news," Baffert told the AP. "I've never had a horse that threw in four magical races in a row that were off the charts. He was just brilliant.

“…He was like iron. I couldn't get that horse tired. He was never blowing. He would just take a deep breath. Even in Dubai, he came back like it was nothing."

Race on, buddy. You took my breath away.