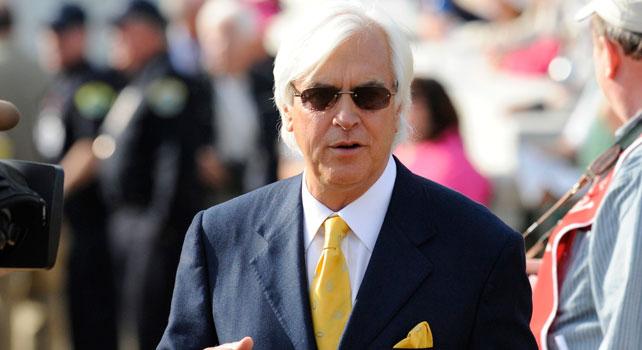 Shortly after 9 o’clock Saturday morning, Hall of Fame trainer Bob Baffert – one of the guest panelists at the Donuts At Del Mar program --  gave the crowd, estimated at around 800, the answer to the question that had been tantalizing racing since late Friday afternoon.

Martin Garcia will replace the injured Joel Rosario on Game On Dude for the $1 million TVG Pacific Classic, having been freed up to ride the favorite for Del Mar’s signature event by Baffert scratching Liaison from the Classic.

Garcia, also on the panel, was informed of Baffert’s decision at the same time as the audience. “Yes,” he said emphatically. “It’s about time.”

Garcia rode Game On Dude three times between early May of 2010 and late May of 2011 with one victory in the Lone Star Derby in Texas. Garcia has been aboard for morning workouts of Game On Dude, the Santa Anita Handicap and Hollywood Gold Cup winner this year. Hall of Fame jockey Mike Smith was aboard in the afternoons for what became a five-race winning streak.

Smith gave up the mount on Game On Dude in the Pacific Classic to honor a commitment to ride super mare Royal Delta Sunday in the $600,000 Personal Ensign Invitational. Baffert secured the services of Rosario, the nation’s leading rider, for Game On Dude two weeks ago but had to quickly formulate contingency plans when Rosario suffered a broken foot in a spill in the seventh race at Saratoga late Friday afternoon.

Baffert told the Donuts At Del Mar assembly that Liaison’s next race would be the $90,000 Harry F. Brubaker Stakes on Saturday, August 31. From there the 4-year-old colt, owned by Arnold Zetcher, will go to the Awesome Again Stakes at Santa Anita in October with an eye to a Breeders’ Cup assignment.

Baffert said they had formulated the plan soon after hearing of Rosario’s injury but waited until Saturday morning to make it public.

Hall of Fame trainer Bob Baffert was enjoying some beach time Friday afternoon when he received a phone call from Bernie Schiappa, an ownership partner in TVG Pacific Classic favorite Game On Dude.

Schiappa had been watching TV, flipping between the Little League World Series and horse racing channels, and caught the seventh at Saratoga. Joel Rosario, who was scheduled to ride Game On Dude in Sunday’s $1 million signature race of the Del Mar meeting, was unseated when his mount, Casual Elegance, stumbled past the finish line and word quickly spread that the nation’s leading rider had broken a bone in his foot.

“When a guy like Rosario goes in for X-rays, it’s not good,” Baffert said Saturday morning at his Barn GG stable office. “We knew right then we’d have to find a replacement. I started figuring out who was open. My main concern is the horse, but he’s easy to ride.”

Rosario met with Dr. Rick Alfred, an orthopedist and New York Giants team physician, Saturday morning and had his broken left foot put in a cast. The initial prognosis was that Rosario would be sidelined for six weeks.

It’s not like it presented an unprecedented situation for Baffert.

He immediately recalled the 2000 Pacific Classic among several examples of having to make a late-breaking rider switch.  Corey Nakatani, scheduled to ride General Challenge, was injured in a spill two races before the Classic.

“He’s was on a really good horse of Simon Bray’s and Allen Paulson’s,” Baffert said. “Her name was Candace In Paris. Nakatani was riding like a wild man at that time. Everything he got on was favored.”

Baffert made a popular choice in putting Laffit Pincay, Jr. on General Challenge. The Golden Eagle Farm gelding, the defending race champion, went off as the odds-on favorite in a field of seven but finished fourth, beaten 3 ¾ lengths as Skimming recorded the first of two consecutive wire-to-wire Classic victories.