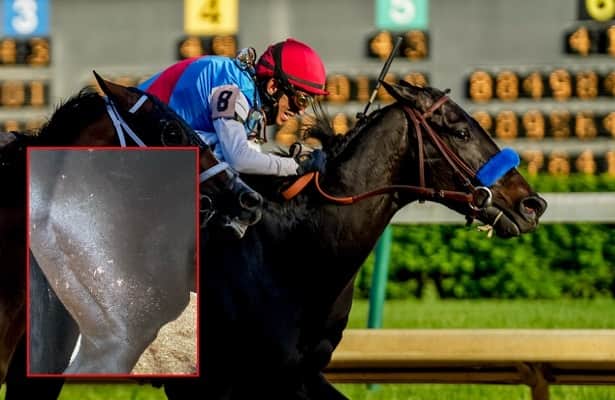 Trainer Bob Baffert issued the following statement concerning 2021 Kentucky Derby winner Medina Spirit, who was found to have the anti-inflammatory medication betamethasone in his system after the race.

On May 8, 2021, I was informed by the Kentucky Horse Racing Commission that Medina Spirit allegedly tested positive for 21 picograms of betamethasone. On May 9, 2021, I held a press conference in which I stated that I intended to thoroughly investigate how this could have happened and that I would be completely transparent throughout the process. I immediately began that investigation, which has resulted in me learning of a possible source for the betamethasone, and now, as promised, I want to be forthright about what I have learned.

Following the Santa Anita Derby, Medina Spirit developed dermatitis on his hind end. I had him checked out by my veterinarian who recommended the use of an anti-fungal ointment called Otomax. The veterinary recommendation was to apply this ointment daily to give the horse relief, help heal the dermatitis and prevent it from spreading. My barn followed this recommendation and Medina Spirit was treated with Otomax once a day up until the day before the Kentucky Derby.

Yesterday, I was informed that one of the substances in Otomax is betamethasone. While we do not know definitively that this was the source of the alleged 21 picograms found in Medina Spirit’s post-race blood sample, and our investigation is continuing, I have been told by equine pharmacology experts that this could explain the test results. As such, I wanted to be forthright about this fact as soon as I learned of this information.

As I have stated, my investigation is continuing and we do not know for sure if this ointment was the cause of the test results or if the test results are even accurate, as they have yet to be confirmed by the split sample. However, again, I have been told that a finding of a small amount, such as 21 picograms, could be consistent with application of this type of ointment.

I intend to continue to investigate and I will continue to be transparent. In the meantime, I want to reiterate two points I made when this matter initially came to light. First, I had no knowledge of how betamethasone could have possibly found its way into Medina Spirit (until now), and this has never been a case of attempting to game the system or get an unfair advantage. Second, horse racing must address its regulatory problem when it comes to substances which can innocuously find their way into a horse’s system at the picogram (which is a trillionth of a gram) level. Medina Spirit earned his Kentucky Derby win, and my pharmacologists have told me that 21 picograms of betamethasone would have had no effect on the outcome of the race.

Medina Spirit is a deserved champion and I will continue to fight for him.

Close-ups of the dermatitis on MEDINA SPIRIT'S hindquarter. It isn't easy to spot given how dark his coat is but it is noticeable. #Preakness146 #Medinaspirit