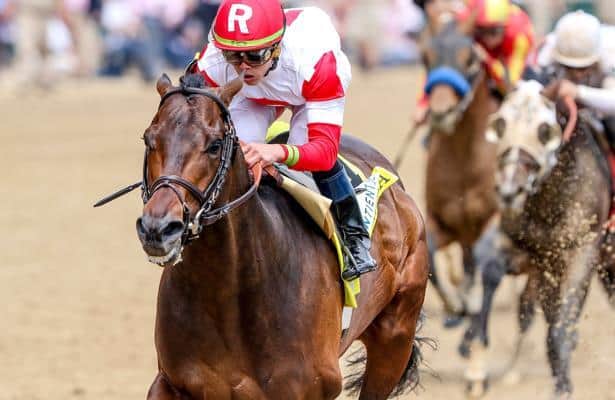 Ken and Sarah Ramsey's Backyard Heaven will make his anticipated return Sunday off an 11-month layoff in Belmont Park's $100,000 State Dinner, the final stakes of the Belmont Park spring/summer meet.

In the spring of 2018, the Chad Brown-trained son of Tizway won Churchill Downs' Grade 2 Alysheba by 4 ½ lengths to emerge as one to watch as an older horse. After running sixth as the favorite in the Grade 1 Stephen Foster in June of that year, Backyard Heaven tried to redeem himself in the Grade 1 Whitney on August 4 at historic Saratoga Race Course, but finished seventh.

Needing surgery to remove an ankle chip, Backyard Heaven will make his return to racing following nine breezes on the Saratoga training track since May 7, including a final breeze on June 30 when he went five furlongs in 1:00.98.

Brown, who has a virtual lock on the meet's training title, has Irad Ortiz Jr. riding from post 1 in a six-horse field of 4-year-olds and up.

Also Sunday, Daniel McConnell's Prince Lucky will be looking to return to his early campaign form off a ninth-place finish in the Grade 1 Runhappy Metropolitan Handicap on Belmont Stakes Day on June 8.

The Corinthian gelding started his 4-year-old year with a pair of graded stakes wins, earning triple digit Beyer Speed Figures. Prince Lucky surged to a six-length win in the one-mile Hal's Hope on February 23 at Gulfstream Park in his seasonal bow, earning a 106 figure, and followed with a 4 ¾-length win over the same distance and track in the Grade 2 Gulfstream Park Mile on March 30, netting a 100 Beyer.

After running sixth in the Grade 3 Westchester and tiring late against a talented Metropolitan field headed by Mitole's win, trainer Todd Pletcher assistant Byron Hughes said Prince Lucky is ready to stretch out to the 1 1/16-mile State Dinner distance for the first time since winning the 2018 Easy Goer by a neck at Belmont.

"He came out of the Met Mile in good shape," Hughes said. "He was just a little overmatched at the time. But he breezed back well and we'll try to get back on track on Sunday. I think a mile or a mile and an sixteenth, he should do well."

Prince Lucky will have the services of Hall of Fame jockey John Velazquez in breaking from post 2.

Two-time graded stakes winner Sunny Ridge is coming off his first victory in four starts in 2019, posting a three-quarters of a length win in the Grade 3 Salvator Mile on May 25 at Monmouth Park. The veteran 6-year-old gelding, who won his first graded stakes with the 2016 Grade 3 Withers on Aqueduct's now defunct inner track, has finished on the board in five of his last six starts for trainer Jason Servis, including third in the Westchester and second in the Grade 2 Kelso Handicap to Patternrecognition on September 22 at Belmont.

With a 7-6-5 record in 25 career starts, Sunny Ridge, owned by Dennis Drazin, has banked $1,338,557 in career earnings. Jose Lezcano, aboard for the Westchester and Salvator Mile, will have the return call out of post 6.