'Back to riding': Espinoza looks to pick up more mounts 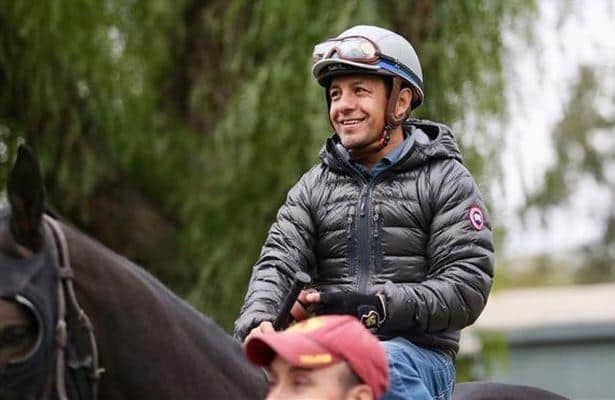 Victor Espinoza does not plan to retire anytime soon.

The affable native of Mexico, his smile as imminent and bright as the sunrise, burst onto the international racing scene with the fairytale horse California Chrome seven years ago, swept the Triple Crown on American Pharoah a year later and became a global celebrity, appearing on “Dancing with the Stars” and “The Tonight Show,” with lucrative commercial offers his for the taking.

A member of the Hall of Fame since 2017, Espinoza’s honors could fill a mansion’s mantle, among them Santa Anita’s George Woolf Memorial Jockey Award, three ESPYs as best jockey, three Kentucky Derby wins and the “Excellence in Sports Performance Yearly Award” presented by the ABC Network.

But it’s not all take. He understands it is better to give than to receive, which is why Espinoza has been donating 10 percent of his sizable income to the City of Hope pediatric research and treatment center in Duarte, Calif., to aid children stricken with cancer.

All of his accomplishments became relatively meaningless, however, on July 22, 2018, when he suffered a severe neck injury during a workout spill at Del Mar.

The damage was career-threatening, but Espinoza labored through it and was back riding and winning seven months later.

But on May 23 he turns 49, and today appears to be merely a dot on racing’s map. He has ridden in only 22 races at Santa Anita this meet, winning two, the last coming aboard Stella Noir on March 19.

But figures can be deceiving. This is not to say elder statesmen in the jockey colony find mounts hard to come by this meet, since fellow Hall of Fame members Kent Desormeaux, 51, and Mike Smith, 55, ride here too, fulfilling one vital requirement: You must be present.

Victor Espinoza still has a passion for the game and his priorities in order.

“He had to step away for a while,” said his agent of eight years, Brian Beach, explaining Victor’s sparse participation this meet. “He went to Mexico to help his mother, who is in her 80s and required some medical attention, but we didn’t want to publicize it. He kept a low profile and it cost him time.

“While all that was going on, just about every horse he had been riding ran, and since we had kind of a small circle of business to start with, it’s been kind of tough.

“We’re trying to get back to riding, but with two and three days of racing a week and short fields, it’s been difficult.

“But Victor is healthy and ready to go. He’s a workout fiend and been posting his workout videos on Instagram, so we’re looking for the right opportunities to come along.”

Don’t bet against them. Victor Espinoza always looks at the glass as half full, and with career purse earnings approaching $205 million, it is safe to say that racing needs Espinoza more than Expinoza needs racing.

Little wonder he once called himself “The luckiest Mexican on earth.”