Back on dirt, Wildman Jack streaks to emphatic win in G3 Palos Verdes 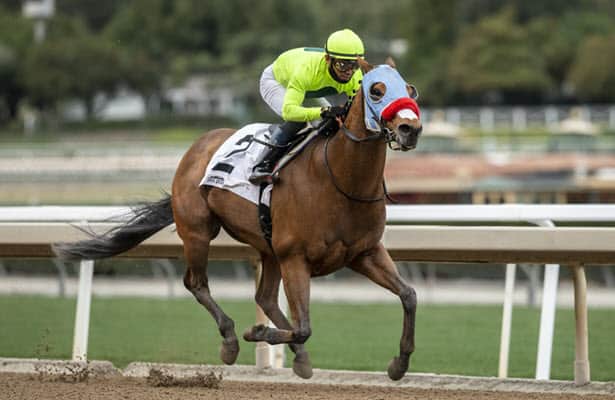 Trainer Doug O’Neill’s Wildman Jack relished a return to the main track on Saturday at Santa Anita, as he drew off to an emphatic 4 1/4 length win in the Grade 3, $200,000 Palos Verdes Stakes. Ridden by Abel Cedillo, he got six furlongs in a scintillating 1:08.98.

Breaking from post position two, Cedillo was content to let last year’s Palos Verdes winner, Captain Scotty, clear him early and then Wildman Jack tracked the pacesetter into the far turn.  Leaving the quarter pole, Wildman Jack put a head in front and although he was a bit green late, won in-hand at the wire, providing Cedillo his third win on the day and O’Neill with a training double.

“Last time (Grade 2 Joe Hernandez Stakes on Jan. 1) I was sitting perfect, but he lost his shoes,” said Cedillo, who had a four-win day Friday and added three more Saturday.  “He lost his shoes, that’s why he stopped…(The way) he ran today, I think he’s better on the dirt.”

“He’s been on the grass, but we loved his dirt race at Del Mar (a close fourth in the Grade 1 Bing Crosby Stakes four starts back on Aug. 1),” said O’Neill’s assistant Leandro Mora. “We’ve been thinking about getting him back on the dirt since then and Doug and the owners decided this race would be good.  This is a huge win for him…It’s been awhile since we had back to back days like this, it’s great to win.”

(O’Neill had three wins yesterday and his win earlier today came with promising Derby prospect The Great One).

Bred in Kentucky by W C Racing, Wildman Jack, who is out of the Orientate mare Orientatious, is also owned by Glenn Sorgenstein WC Racing, Inc.  A Group 3 sprint turf stakes winner on March 7, 2020 in Dubai, and a winner of the Grade 3 Daytona Stakes going 5 ½ furlongs on turf here on May 23, Wildman Jack now has three graded victories and is 14: 5-3-1 overall.  With the winner’s share of $120,000, he increased his earnings to $559,505.

Unhurried early, Shashashakemeup was a close third after the first half mile and was second best on the day, finishing 1 ¾ lengths in front of late running Pyron.  Off at 5-1 with Juan Hernandez, Shashashakemeup paid $6.80 and $4.20.

Breaking from the rail with Umberto Rispoli, Pyron was last early and was up to touch 3-1 favorite Ax Man by a neck for third.  Off at 7-2, Pyron paid $3.20 to show.