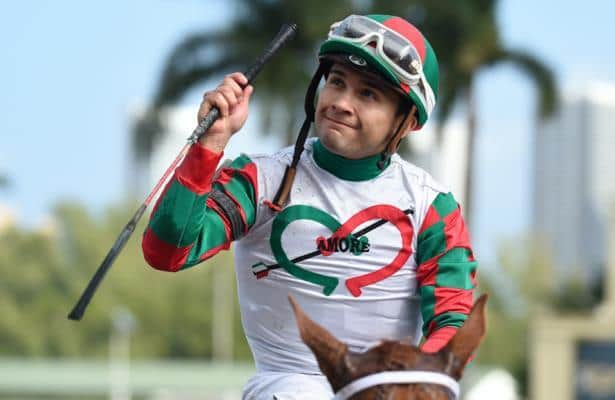 A month into his comeback from an injured knee that is at full strength for the first time in a year, jockey Nik Juarez is finally feeling like himself again.

Juarez is spending his third straight spring in South Florida, and the 26-year-old Baltimore native said he is considering extending his stay at Gulfstream Park, which has continued safely conducting spectator-free programs throughout the coronavirus pandemic that has shut down or delayed racing across the country.

“We’re just trying to see how it plays out in the northeast,” Juarez said. “We’re very fortunate here to continue to keep running, so as long as things continue to keep going good here the way they have been, I’d love to stay here.”

This wouldn’t be the first time Juarez stationed year-round at Gulfstream. Monmouth Park’s leading rider in 2017, who was second with 107 wins but first in purse earnings on the Jersey shore in 2019, won 88 races and more than $2.7 million combined during Gulfstream’s 2018 spring and summer stands.

The winter of 2019-20 turned into an uncharacteristic struggle for Juarez, registering just five wins with 21 seconds and 14 thirds, and led him to the decision to step away Feb. 8 with seven weeks left in the meet allowing himself to heal, mentally and physically.

In addition to rest and treatment for a torn meniscus in his knee, Juarez and his girlfriend were able to go to Sweden and visit her family, arriving back in the U.S. before the suspension of international travel.

“It turned out it happened last May. A horse threw me out of the gate at Monmouth and when I landed, kicked and tore my meniscus. From that point on, I was kind of battling it. We had such a good Monmouth meet I didn’t want to take any time off. We were just trying to keep on going,” Juarez said.

Gulfstream kicked off its spring-summer meet April 2, and Juarez rode his first races back April 19. Through the last live program May 17, Juarez had five wins from 50 mounts and purse earnings of more than $110,000.

“Honestly, when it would have been time for me to come back we had to kind of look at the whole situation and what was going on with the coronavirus,” Juarez said. “When it looked like we were going to continue to keep running here, I just wanted to get back to riding and come back down here. Everybody down here has been pretty good to me, so I’m just happy to be back.”

Represented by agent Jay Rushing and the son of ex-jockey Calixto Juarez, now a trainer in Maryland, Juarez owns 794 career wins with nine graded-stakes victories, including the 2016 Skip Away (G3) with Valid and 2018 Marshua’s River (G3) on Ultra Brat at Gulfstream.

“Since I’ve been back I feel really good. It kind of sucked because I couldn’t get on horses early in the morning, so it was just jumping right back into riding, but it feels good,” he said. “It feels better and better every day, especially when you’ve got good horses to ride. It’s much easier.”