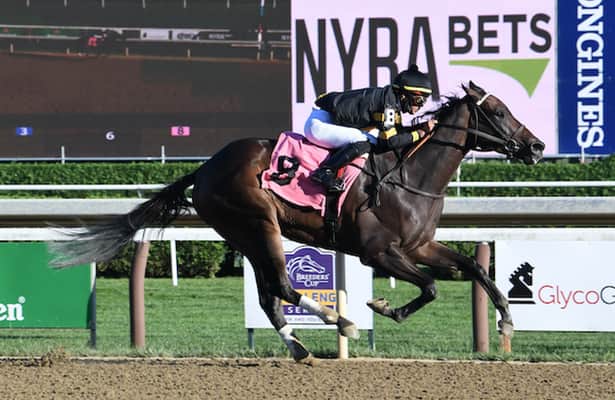 Owned by Wachtel Stable in partnership with Pantofel Stable, Gary Barber and Jerry Zaro and trained by Hall of Famer Bill Mott, Baby Yoda most recently was a close second as the favorite in the Kelso (G2) on Oct. 29 at Belmont at the Big A. He set a moderate tempo on the backstretch before being passed up by upset winner and probable returning rival Double Crown inside the sixteenth pole.

A four-time winner of eight starts this season, the 4-year-old Prospective gelding defeated starter-allowance company going six furlongs twice in Kentucky at the beginning of the year before securing allowance optional-claiming scores on the NYRA circuit going seven furlongs and a one-turn mile, respectively. He was a narrowly beaten second in the Pelican at Tampa Bay Downs in his 2022 debut and was a distant second to Flightline in last year’s Malibu (G1) at Santa Anita.

Baby Yoda worked a half-mile in 48.60 seconds over the Belmont Park training track on Saturday.

“He’s a little bit of a folk hero, but he’s never won a stakes race,” Wachtel said. “He’s come close a couple times, he finished second to Flightline in the Malibu. I would hope that we get some weight from some of these others. But so far, that’s the plan. If he comes out of yesterday’s work in good shape, we’ll be there next Saturday.”

“That was quite something. I came up that day on a last-minute trip and I knew he was training well and I knew how good Olympiad was,” Wachtel recalled. “That was quite the extraordinary effort. The next morning, I was at the training track and other trainers that I knew were making comments about how good the horse was. He’s been a really cool horse that’s run in big races against big competition. We gave him a little class relief in Kentucky this spring running in some starter races, just trying to get his confidence back up.”

Wachtel, who is a part owner of the Mott-trained 2020 champion male turf horse Channel Maker, said the 8-year-old son of English Channel will remain in training in 2023. The earner of over $3.7 million was seventh in the Breeders’ Cup Turf on Nov. 5 at Keeneland last out to cap off a season that included victories in the Elkhorn (G2) in April at Keeneland and the Grand Couturier in July at Belmont Park.

“Physically, the horse looks unbelievable. He’s 8 years old, and Bill and his staff said this summer that he looks better now than he did two years ago,” Wachtel said. “He’s all dappled out and he looks phenomenal, and he hasn’t lost anything. As long as he is physically well enough, we see no reason why we shouldn’t go on with him. He’s getting a little break, but he’s not leaving the track. We probably won’t run him until late February at the earliest.”