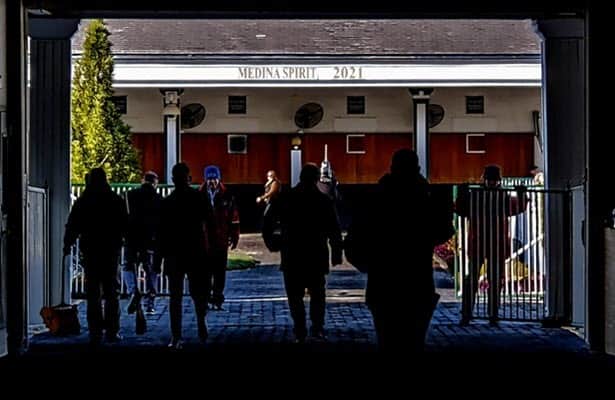 In a move seen by many as an inevitability, the late Medina Spirit was disqualified by the state’s stewards from his position as winner of the 2021 Kentucky Derby.

The ruling was posted Monday after a stewards hearing via Zoom last Monday. Trainer Bob Baffert was suspended from racing in Kentucky for 90 days, to begin March 8 and end June 5, and was fined $7,500.

Medina Spirit led the entire way in the May 1 race, crossing the wire first to give Baffert what was a record seventh Kentucky Derby win. But eight days after the race, Baffert announced that the Protonico colt had tested positive for betamethasone, an anti-inflammatory that is banned on race day in Kentucky.

After initially denying any use of betamethasone, Baffert later admitted to the use of Otomax, a cream he said was used to treat a skin condition. "Just very disappointed in the ruling," Baffert's Kentucky attorney Craig Robertson told Horse Racing Nation. "I don't think that it is correct. It runs contrary to the facts of this case and the Kentucky Horse Racing Commission rules, so we will be immediately appealing." Related: Attorney: Baffert is 'very upset' with DQ of Medina Spirit Baffert's other attorney, Clark Brewster, agreed with Robertson. “This ruling represents an egregious departure from both the facts and the law, but the numerous public statements by KHRC officials over the last several months have made perfectly clear that Bob Baffert’s fate was decided before we ever sat down for a hearing before the three stewards,” Brewster said in a Monday statement. Brewster also noted that legal action might be coming to try and force CDI to abandon its two year ban of Baffert and his horses from its tracks, including Churchill Downs. "We are discussing all options,” Brewster told HRN. “The fact that one of the stewards is a current CDI employee raises serious and disturbing bias issues. The decision regarding CDI will come soon." Related: What they said: Full text of Medina Spirit ruling, responses

The positive test and its aftermath led to Baffert being suspended from all Churchill Downs Inc. tracks for two years and rendered his horses unable to earn Kentucky Derby or Oaks points or compete in either race. If the ruling is upheld, Mandaloun would become the official winner of the 2021 Derby, giving trainer Brad Cox his first win in the race. Cox was muted in his response to the disqualification. “Obviously it's a race that'll have an asterisk by it.,” Cox told HRN. “Honestly, there's not a real feeling or emotion. It's unfortunate what all has happened, I'm hopeful something good can come from it in regards to maybe some pre-race testing." Related: Cox is introspective about Mandaloun's 2021 Kentucky Derby victory A Monday statement from Churchill Downs Inc. congratulated Mandaloun and his connections.

"Today Churchill Downs recognizes Mandaloun as the winner of the 147th running of the Kentucky Derby and extends our congratulations to owner/breeder Juddmonte, trainer Brad Cox and jockey Florent Geroux," the news release read. "Winning the Kentucky Derby is one of the most exciting achievements in sports and we look forward to celebrating Mandaloun on a future date in a way that is fitting of this rare distinction."

A representative for Churchill Downs said the paddock sign denoting Medina Spirit as Derby winner will be taken down on Tuesday.

The process of disqualifying Medina Spirit was held up because Baffert sued the KHRC to force further testing of the colt’s split urine sample in an attempt to prove the failed drug test was caused by Otomax. Even though Baffert and his attorneys pointed out that the results came back in their favor, Medina Spirit still was disqualified Monday. A spokesperson for the KHRC said the commission will have no further comment on the disqualification.

The news came two months after Medina Spirit died of a suspected heart attack following a work at Santa Anita in December. The final cause of death was to be determined by a necropsy, according to the track and the California Horse Racing Board. The results of the necropsy were made public on Friday, with no certain cause of death noted.

Baffert recently went through a hearing with the New York Racing Association to help determine whether he would receive a lengthy suspension there. A judge who was brought in for the hearing has yet to make a recommendation to NYRA on what the outcome should be.

Hear Robertson, Cox and Stahl on Ron Flatter Racing Pod.
The dates of the suspension, if reciprocated by other jurisdictions, would cause Baffert to be unable to enter the Preakness, Belmont and Santa Anita Derby among other races. Pari-mutuel results of the Derby were not impacted by Monday's ruling. Related: New lawsuit is filed against Baffert, Churchill Downs The full stewards ruling can be read below.
Medina Spirit Bob Baffert