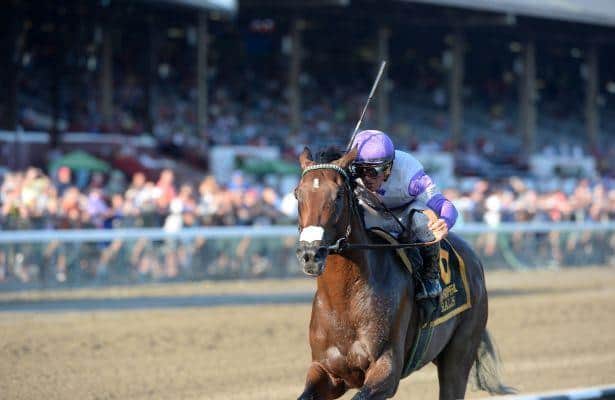 Observers hoping to get a line on the talent for next Saturday’s $2 million Sentient Jet Breeders’ Cup Juvenile (G1) received a quick, 15-minute peek Friday morning as four pre-entrants worked just after the track opened from the morning renovation break.

“I’m happy, Kieren’s happy and (trainer) Doug (O’Neill) is even happier,” assistant Jack Sisterson said. “His other horses are working this morning at Santa Anita and will be here Sunday.”

The other O’Neill horses Sisterson referenced were the undefeated Nyquist (Juvenile) and Sharla Rae (Filly & Mare Turf-G1). For the Juvenile, Sisterson said Javier Castellano would ride Ralis and Mario Gutierrez would be on Nyquist.

Next up was Richard Ravin and Patricia’s Hope’s Cocked and Loaded for trainer Larry Rivelli.

“We’re ready,” said Rivelli, who has not saddled a Breeders’ Cup starter. “Jose said when he was coming down the lane, he was talking to him all the way, ‘Whoa, whoa.’ ”

Coming through the stretch next was Champagne (G1) winner Greenpointcrusader with jockey Joe Bravo up for trainer Dominick Schettino.

Working a day earlier than expected because of a rainy forecast for Saturday, Greenpointcrusader worked a half-mile in :46.20 and galloped out five-eighths in :59.20 after earlier splits of :11.40 and :23.20.

The second Keeneland work for Greenpointcrusader got a thumbs-up from Schettino and a big grin from Bravo.

“That was awesome,” Bravo said. “I threw him a little cross at the wire to ask the question about what he had left and he answered it and saved some for next week.”

A winner of two of three starts, Greenpointcrusader is owned in partnership by St. Elias Stables, Brooklyn Boyz Stables and MeB Stables.

Completing the string of workers was Sticksstatelydude, owned by the Estate of Alvin Haynes, John Ferris, Brad Ward and Pack Pride Racing.

“I’m happy with it,” Burchell said. “The key thing with him is to get him to settle and make one run.”

Burchell said Sticksstatelydude would have one gate schooling session next week, probably Wednesday, prior to the Breeders’ Cup.