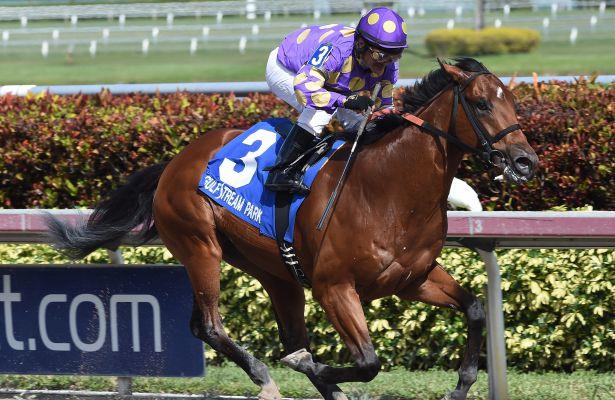 Photo: Gulfstream Park
Stepping up in distance and competition proved to be no obstacle for Jacks or Better Farm homebred Awesome Banner on Saturday, keeping his perfect record intact with an impressive five-length victory in the $150,000 Swale (G2) at Gulfstream Park.
The 35th running of the seven-furlong Swale for 3-year-olds was the second of five stakes on Saturday’s 12-race program, four of them graded, anchored by the $350,000 Lambholm South Holy Bull (G2).
A bay son of Awesome of Course trained by Stanley Gold, Awesome Banner ($3.80) was sent off as the 4-5 favorite in a field of six, hitting the wire in 1:21.81 over a fast main track. Economic Model, the 3-1 second choice making just his second career start and first in nearly six months, rallied late for second, a nose in front of Richie the Bull.
“He’s a nice little colt. He still doesn’t know much and hasn’t figured it out yet, but he can run,” winning jockey Jose Caraballo said. “When he turns for home, that’s when he really takes off. He’s a pretty good colt. He’ll go further – he’s ratable, he’s not speed crazy at all. He’ll go as easy as you want him to go.”
Caraballo hustled Awesome Banner to the front from post three, taking the field through a quarter-mile in 22.68 seconds, a half in 45.07 and six furlongs in 1:08.88 while being chased by Noholdingback Bear to his outside.
Second to Awesome Banner in the Hutcheson (G3) Jan. 2 at Gulfstream in their previous meeting, Noholdingback Bear began to drop back leaving the backstretch and Awesome Banner started to separate from the field near the quarter pole, pulling away down the lane with Economic Model and Richie the Bull in pursuit.
“I was anxious until he drew off,” Gold said. “I was watching the horses on the outside coming up but I knew we were clipping along. I wanted to see him do it the same way he did last time and he had that gear and he had that stamina and he just took off. I’m very satisfied, and as time goes on rather than run big races he’s showing consistency. We know kind of what we’ve got here, let’s just see how far up the ladder we can go.”
Awesome Banner ran just once as a 2-year-old, setting a Gulfstream track record for 4 ½ furlongs in a 9 ¾-length victory last June before being sidelined with a knee chip. He didn’t race again until the six-furlong Hutcheson, where he wired the field to win by 4 ¾ lengths.
Carrying topweight of 122 pounds, spotting two to six pounds to his rivals, Awesome Banner pushed his career earnings to $215,020 and put himself squarely in the mix for Gulfstream’s upcoming 3-year-old races, the $400,000 Fountain of Youth (G2) Feb. 27 and the $1 million Florida Derby (G1) April 2.

“I honestly don’t know [what’s next]. I’m not going to think about it. Certainly two turns is going to be on the horizon and if you want to think bigger than the Fountain of Youth, you have to start going along and getting points. We’ll see,” Gold said. “Mile and a sixteenth will be no problem for him, I’m sure. A mile and a sixteenth is not a mile and a quarter, but you’ll know better when you start running a distance of ground and see if you can relax and stay the ground. That’s what we’ll see.”