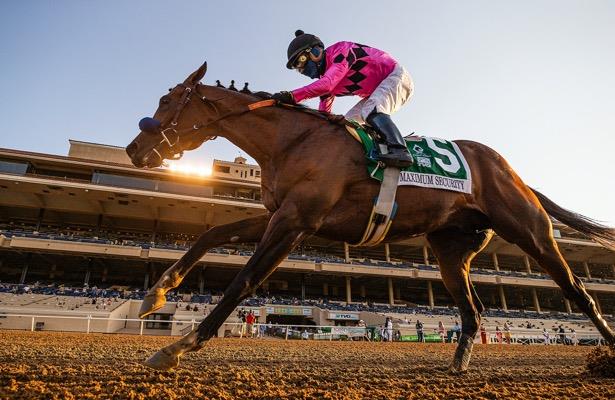 Improbable and Maximum Security are co-headliners for the Grade 1, $300,000 Awesome Again Stakes. The two 4-year-old colts, both multiple Grade 1 winners, meet for the first time since the 2019 Kentucky Derby.

Only three other runners are entered to battle the two favorites in the Awesome Again, a “Win and You’re In” qualifier for the Breeders’ Cup Classic. Post time for the 1 1/8-mile dirt route is 8:14 p.m. EDT.

Here’s a look at the 2020 Awesome Again field, with morning line odds:

TimeformUS’ pace projections show Maximum Security getting out to the lead under jockey Luis Saez, who’s back aboard the New Year’s Day colt for the first time since February’s Saudi Cup. Can long shots Sleepy Eyes Todd or Take the One O One make the favorite work early?

Maximum Security’s two most likely rivals, Improbable and Midcourt, are expected to track the front trio.

Check out free PPs from our friends at Brisnet for more information on the Awesome Again’s five runners.

TVG will be live on-site all weekend at Santa Anita as the Arcadia, Calif., track begins its fall meet.

Christina Blacker, Britney Eurton and Todd Schrupp will broadcast from the grounds at Santa Anita. They will be joined by Simon Bray and Mike Joyce, both contributing to the broadcast remotely.

Reinier Macatangay runs through the Awesome Again field. He finds Improbable and Maximum Security to be “the two horses capable of winning” with the latter a possible single in multi-race wagers.

The Awesome Again will help shape the Eclipse Award race for the Older Male Dirt division heading into the Breeders’ Cup. Chip Gehrke has Maximum Security leading that group, with Improbable not far behind.

This week on HorseCenter, hosts Matt Shifman and Brian Zipse offer their analysis for the Awesome Again. The duo also previews another Breeders’ Cup Classic qualifier, next weekend’s Preakness Stakes.

An upset Saturday by Midcourt, Sleepy Eyes Todd or Take the One O One would earn any member of that trio a Breeders’ Cup Classic berth. See which runners have clinched spots in that championship event, and which other horses are under consideration.

Courtesy of the NTRA, here are previews for the quartet of graded stakes that Santa Anita hosts Saturday leading up to the Awesome Again:

With three out of the five runners in the Chandelier Stakes, Bob Baffert would appear to “have ’em surrounded” indeed, as his budding starlet Princess Noor fairly towers over her competitors, based upon two impressive tallies at Del Mar over the summer. Princess Noor has done little wrong in two starts, taking her 5½-furlong debut by 2½ lengths at 3-5 on Aug. 22 and crushing five rivals by 6½ lengths at 3-5 in the Del Mar Debutante (G1) going seven furlongs Sept. 6.

Blessed with a pair of talented turf distaffers, trainer Richard Baltas has a big look at the Rodeo Drive Stakes at Santa Anita, as his Lady Prancealot, a fast closing second in her most recent start, has solid distance credentials, while his Bodhicitta is in top form although distance may be a question. A winner of the American Oaks (G1) in her only try at the Rodeo Drive distance five starts back Dec. 28, Lady Prancealot is winless in four graded stakes this year, but she flew late to be beaten a diminishing neck in the John C. Mabee Stakes (G2) at Del Mar on Sept. 5 and merits top billing.

A winner of three out of his last four starts and no worse than third in his last nine, Richard Mandella’s classy United heads up a field of eight 3-year-olds in Saturday’s John Henry Turf Championship. Most recently second, beaten a diminishing head at 3-5 in the Del Mar Handicap (G2), United will again use the John Henry as a springboard to the Breeders’ Cup Turf at Keeneland, a race in which he was a close second to eventual Horse of the Year Bricks and Mortar last year at Santa Anita.

Unbeaten in two starts for Bob Baffert, Gary and Mary West’s homebred Maximum Security, roundly regarded as the best in training today, heads a field of field of five 3-year-olds and up going 1 1/8 miles in Saturday’s Grade 1, $300,000 Awesome Again Stakes at Santa Anita.

A two-time stakes winner at Del Mar this past summer, Maximum Security comes off a huge three-length win in the Pacific Classic (G1) on Aug. 22 and will once again be a prohibitive favorite in what will be his 13th career start.

Baffert’s Improbable, a Grade 1 winner of the Whitney Stakes at Saratoga Aug. 1, earned a career-best Beyer Speed figure of 106 and will be bidding for his third consecutive win.

The John Shirreffs-trained Midcourt, who was beaten a nose by Maximum Security two starts back in the San Diego Handicap (G2), was a well beaten third behind “Max” in the Pacific Classic and will be facing him for the third consecutive time Saturday.

Immensely talented but star-crossed, this 4-year-old colt by New Year’s Day appears to be thriving in Baffert’s care.  Ridden in his two Del Mar starts by Abel Cedillo, he’ll be reunited with eastern-based Luis Saez, who has finished first on him in six out of seven starts, most recently in Saudi Arabia, where he took the $20 million Saudi Cup by three quarters of a length.  Although the Saudi Cup results remain official, Maximum Security’s purse earnings remain on-hold as an investigation into his original trainer Jason Servis continues.  Adding to his hard-luck resume is the fact he became the only Kentucky Derby winner to ever be disqualified for a racing infraction in the 2019 Derby, a race he won by 1¾ lengths with Saez aboard.  An official winner of 10 out of his 12 starts, Maximum Security has banked $12.1 million and will be making his first start at Santa Anita.

The 4-1 post time favorite in the 2019 Kentucky Derby, he finished fifth, beaten 3¼ lengths by Maximum Security.  A winner two starts back of the Hollywood Gold Cup (G1), run at Santa Anita on June 6, he’ll be reunited with Drayden Van Dyke, who did not ride him at Saratoga. Van Dyke has won aboard Improbable in five out their seven pairings, including his Gold Cup win. A winner of six out of his 13 starts, Improbable, a 4-year-old colt by City Zip, has earnings of $1.5 million.

Although narrowly beaten two starts back in the San Diego Handicap, this 5-year-old gelding by Midnight Lute was no match for Maximum Security in the Pacific Classic when third.  A shining testament to Shirreffs’ horsemanship, Midcourt has been able to overcome his idiosyncrasies, including bad manners in post parade.  If his mind is right, he rates an upset chance over a track on which he is 8: 3-1-2.