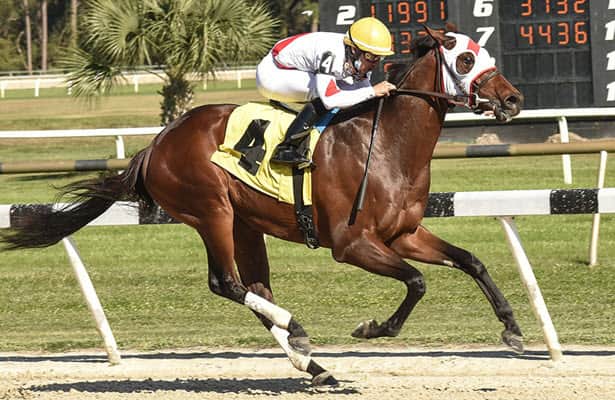 For many 3-year-old Thoroughbred owners and trainers, January is a month when dreams can take wings.

On Skyway Festival Day Saturday at Tampa Bay Downs, the connections of a pair of Florida-breds – $125,000 Pasco Stakes winner Markhamian and $125,000 Gasparilla Stakes winner Outfoxed – gained a license to look toward even more lucrative prizes after convincing victories on the fast Oldsmar racing surface.

Markhamian, a late May 2018 colt bred and owned by Sergio Ripamonti and trained by Juan Carlos Avila, found another gear in deep stretch to post a 2 1/2-length triumph from Provocateur, with favorite Cattin, the Dec. 4 Inaugural Stakes winner, third in the seven-horse field. Marcos Meneses rode the winner, who posted a 7-furlong time of 1:23.23 and paid $12.60 as the fourth betting choice.

Outfoxed was just as impressive in the Gasparilla, which featured a field of eight ambitious sophomore fillies. Reserved in mid-pack early by jockey Samy Camacho, Outfoxed staged a tenacious rally through the stretch to catch the Dec. 4 Sandpiper Stakes winner, Strategic Bird, with Goddess of Fire rallying to grab second, three-quarters of a length back of the winner and three-quarters better than Strategic Bird.

Outfoxed, who won a pair of Florida Thoroughbreds Breeders’ and Owners’ Association stakes last year at Gulfstream by a combined 22 3/4 lengths, completed the 7 furlongs in 1:23.37. She paid $4.20 as the betting favorite. Now 3-for-4 lifetime, she is owned by the LNJ Foxwoods concern of Larry and Nanci Roth and their daughter Jaime Roth and trained by Hall of Fame conditioner Bill Mott.

The best news for the connections of the winners, on this sunny and pleasant Saturday, at least, is that both were eligible for the $50,000 Florida Sire Stakes bonus and the $25,000 Florida-bred bonus (both offered through the FTBOA), meaning they each earned a cool $105,000 from the total purse.

In today’s third stakes, the $50,000 Wayward Lass for older fillies and mares, 7-year-old mare Nantucket Red stole away to a 6-length lead up the backstretch and had plenty left in the tank to turn back a late rally from betting favorite Allworthy by 3 lengths. Don’t Get Khozy finished third.

Olaf Hernandez rode Nantucket Red, who paid $33.60 to win after completing the 1 1/16-mile distance in 1:44.53 for her first stakes victory. The daughter of Get Stormy-Scarlett Madeleine, by Smart Strike, is owned by Colebrook Farms of Canada and trained by Michael Wright, who is 5-for-5 at Tampa Bay Downs this season.

Back to the Pasco, after which Meneses, who is based at Gulfstream Park in south Florida, let out a loud whoop when asked to describe his emotions. Most in the crowd expected the invader to fade after Provocateur and Cattin put in their moves on the turn for home, but Meneses, who has ridden Markhamian in all three starts, could feel his horse was just starting to roll along the inside.

“This horse did everything perfect today,” Meneses said after the son of Social Inclusion-Peruvian Jane, by Colonel John, improved to 2-for-3 with a second. “The fractions were a little fast (22.22 seconds for the first quarter-mile and 44.86 for the half), but I knew I had the horse in the last furlong.”

Ripamonti, who campaigns Markhamian under his Santa Rosa Racing Stables banner, was delighted with the victory, which could put Markhamian on track for the Grade 3, $250,000 Sam F. Davis Stakes here on Feb. 12. “I thought he might be done on the turn, but this horse has a lot of (guts),” Ripamonti said. “Marcos did a good job urging him, and he had the heart to get it done. It was a courageous effort and he drew away at the end.

“He was coming into the race fantastic; he was in great shape and his color and skin tone were good. He was super-ready,” Ripamonti said.

Avila, who knew his horse was talented coming into the race, could have another one like his 2020 Tampa Bay Derby (G2) winner, King Guillermo. That’s the beauty of this time of year; you never know.

Certainly, the connections of Outfoxed were just this side of “over the moon” after she beat a graded stakes-placed filly in Goddess of Fire and a stakes winner in Strategic Bird. Camacho, who was riding the daughter of Valiant Minister-Savingtime, by Kantharos, for the first time, was able to follow Mott’s pre-race instructions nearly to the letter, and it paid off in a professional and convincing triumph for the winner, whose previous victory on Sept. 25 came in the 1 1/16-mile FTBOA Florida Sire My Dear Girl Stakes at Gulfstream.

“(Mott) said she doesn’t have great early speed and to put her in the middle of the pack early, and that’s what I did,” Camacho said. “I got her to relax, and when the other horses started to move I did my work and she responded pretty well. I thought I had the best horse in the race and I thought she was the best at the distance.

“I feel great, because every time I ride for trainers like Bill Mott, it gives me more confidence. It’s a good feeling,” added Camacho, who added the 10th race on the turf on 4-year-old filly Investmentstrategy for owner Klaravich Stables and trainer Chad Brown.

Mott, who watched the race from south Florida, figured going in that Outfoxed might have to work harder than she had in her two previous victories. “It was a different group of horses on a different racetrack , and I thought it took her about a quarter-mile to get her legs under her,” he said. “But she was able to get up in gear enough for the win and was very professional about it.

“The water is going to get deeper from here on, and I think her toughest tests are ahead of her,” said Mott, who said the $150,000 Suncoast Stakes here on Feb. 12 at a mile-and-40-yards could be an option for Outfoxed’s next start. “We want to keep the doors open at Tampa and elsewhere.”