Authentic's 'timing is good' on his way to Kentucky Derby 2020 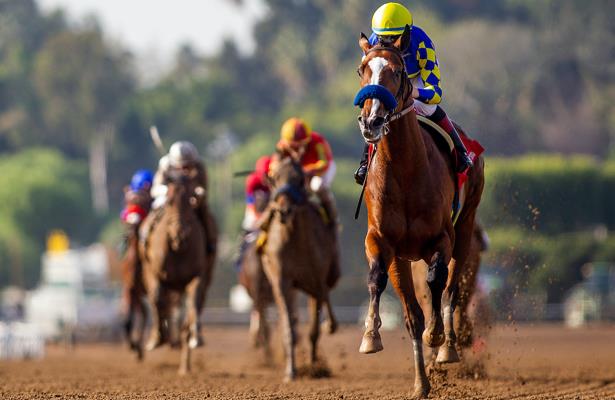 On flashy 3-year-old Authentic’s way to the winner’s circle Saturday, trainer Bob Baffert joked with jockey Drayden Van Dyke: “Do you think he’s a little bit too much horse for you?”

It was just another Saturday on the 2020 Kentucky Derby trail in California, and to no surprise that combination of jockey and trainer prevailed when Authentic took them all the way in the Sham Stakes (G3) at Santa Anita Park.

Whether Van Dyke ultimately makes it to the first Saturday in May with the mount — he often gets them started for Baffert, then yields to more seasoned riders later in the season — remains to be determined.

But Authentic’s the latest in a line of Baffert runners to earn his way further into the preps, where it’s becoming a crowded place in the barn. Just like last season. And the one before that.

“You want to see him run like that, especially this time of year,” Baffert said. “We’ve got some other ones back there — hopefully they’ll come along — but the timing is good for him now to run in the March race, whatever it is.”

Baffert has at least two other colts on track for starts that month, with the Los Alamitos Futurity (G2) winner Thousand Words possible to stay home for the March 7 San Felipe Stakes (G2). The Grade 1 winner Eight Rings will be trained toward Oaklawn Park’s March 14 Rebel Stakes (G2).

Where Authentic fits in will be determined later, though it’s notable that a partnership Baffert nicknamed “The Avengers” is also behind Eight Rings, who won the American Pharoah Stakes (G1) last fall before coming up short in the Breeders’ Cup Juvenile.

SF Racing, Starlight Racing and Madaket Stables et al. saw Authentic, a son of Into Mischief, making just his second start on Saturday, stretch out from a 5 1/2-furlong debut Nov. 9 at Del Mar to tackle a two-turn mile in the Sham.

“I told Bob when he broke his maiden he was my favorite 2-year-old,” Van Dyke said, and that stayed true even after Authentic made the jockey’s life difficult in the Santa Anita stretch.

Authentic, well clear of his rivals after setting the fractions, tried to swerve out toward the grandstand side of the course. Van Dyke corrected, and Authentic responded with two more sharp pulls, looking green as grass.

“He’s very talented,” Van Dyke added. “I think the noise from the crowd made him react the way he did there in the stretch. His ears went toward the crowd, so I think that’s what caused it, but then when he got down to the rail, he spooked himself again.”

Baffert suggested some equipment could be added for Authentic’s next start. In the meantime, he moves forward with a 90 Beyer Speed Figure, adding to the barn’s hopes of winning a sixth Kentucky Derby, which would tie Baffert for the all-time lead with “Plain Ben” Jones.

“Today he wasn’t blowing hard after the race and didn’t take a deep breath,” Baffert said of Authentic, “so that is a good sign.”