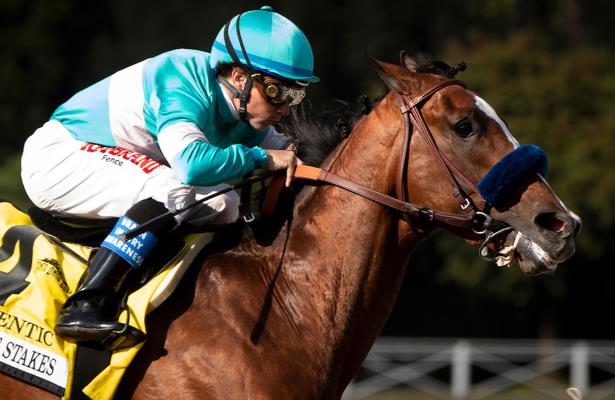 Reached by phone Sunday, a day after sweeping divisions of the Arkansas Derby (G1) with a pair of unbeaten colts, trainer Bob Baffert said he was “trying to get the next batch ready.”

That means Authentic, who remained perfect by exiting a victory in the March 7 San Felipe Stakes (G2).

Baffert backed off the son of Into Mischief once the Santa Anita Derby (G1), originally scheduled for April 4, was postponed. A new Santa Anita Park stakes schedule released last week slots the race back in for June 6 with a $400,000 purse.

“He’s right on target,” Baffert said after Authentic turned in a five-furlong breeze Sunday in 1:00.40.

Authentic worked 5 Furlongs in 1:00.40 at @santaanitapark on May 3rd, 2020, for trainer Bob Baffert. pic.twitter.com/KI9ocbRA4b

Minutes after Charlatan took his Arkansas Derby division in front-running fashion, Baffert stablemate Nadal scored a victory of his own in the second division, running the talented trio’s record to a combined 10-for-10.

“He’s doing really well,” Baffert said. “Those three, I can’t really separate them. If you asked me, ‘Bob, take one for September,’ it’s too hard. They’re all different types of horses.”

The Santa Anita Derby runs on what will be a blockbuster card should Santa Anita receive the needed local government approvals to resume racing behind closed doors. Also on the docket are the Gold Cup at Santa Anita (G1) for older horses and the Santa Anita Oaks (G2).

Baffert has multiple possibilities for the 1 1/4-mile Gold Cup, including Improbable, who scratched from an outside post in Saturday’s Oaklawn Handicap (G2), and McKinzie, who continued working back from a dismal Saudi Cup showing on Sunday with a half-mile drill in 47.80 seconds.

For the Oaks, Gamine should receive a nomination after moving her record to 2-for-2 Saturday when setting the pace and fighting off graded stakes-placed Speech in an allowance race at Oaklawn Park. The $1.8 million filly was stretching out to two turns and, Baffert said, was understandably tired Sunday morning.

“She should be, because that was second out and I threw her a mile and a sixteenth,” he said.

“That might be a spot for her,” Baffert added of the Santa Anita Oaks. “It’s possible. It’s too far out right now.”