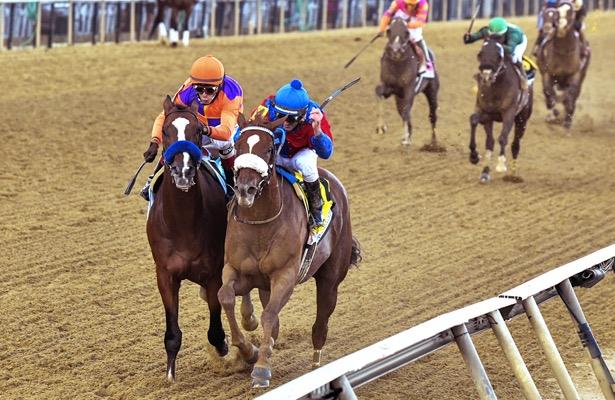 Authentic, who last month became Baffert’s record-tying sixth Derby hero, was bidding to be the trainer’s record-setting eighth Preakness winner. It was not to be for the Into Mischief colt, who came up a neck short of filly Swiss Skydiver at the wire.

“That’s a good filly,” Baffert said of Swiss Skydiver, just the sixth female runner to win the Preakness. “(Authentic) had every chance to get by her. … She dug in. She’s tough.”

Authentic won a stretch duel of his own Sept. 5 at Churchill Downs, pulling clear of Tiz the Law to win the Kentucky Derby. The victory allowed Baffert to tie the late Ben Jones for most Derby victories by a trainer.

Baffert's quintet of Derby-Preakness doubles, along with victories by Point Given (2001) and Lookin At Lucky (2010), gave him seven victories in what is traditionally the Triple Crown series' middle jewel. He is tied for most all-time Preakness wins alongside Robert Wyndham Walden, who saddled seven winners between 1875 and 1888.

But the 145th running of the Preakness was different than any other thanks to COVID-19’s effects on the racing calendar. The 2020 Run for the Black-Eyed Susans took place not on the third Saturday in May, but on the first Saturday in October, and not two weeks after the Kentucky Derby, but four weeks after.

“That’s why I like to come back in two weeks,” Baffert said Saturday after Authentic failed to replicate his Derby triumph.

In the Derby, jockey John Velazquez was able to guide Authentic all the way over from the far outside post to settle in and set the pace. The rider also saved enough horse for a stretch battle against Tiz the Law.

Things did not go as according to plan Saturday for the 3-2 favorite Authentic.

Breaking from post No. 9, Authentic bumped Max Player out of the gates. Velazquez moved the Derby winner toward the front after that contact, but fellow Baffert trainee Thousand Words beat them to the lead.

Under jockey Florent Geroux, Thousand Words set the early pace while Authentic sat outside of him.

“I thought I was going to be on the lead,” Baffert said of Authentic. "(Velazquez) said that it didn’t work out and he was rating him today. He doesn’t like rating. He wants to go fast.”

Authentic moved ahead of his stablemate on the backstretch but could not open up any breathing room thanks to an early move by Swiss Skydiver. Jockey Robby Albarado slipped the filly by Thousand Words and into position alongside Authentic going into the second turn.

“I tried to open up, but he just stood there, and Swiss Skydiver came to him,” Velazquez said.

Authentic and Swiss Skydiver ran side-by-side through the far turn and then through the stretch. Velazquez’s mount never gave in, but just came up a neck short.

“I tried to get him rolling again, but he just stayed with that other horse from the half-mile pole to the wire,” said the Hall of Famer Velazquez, who was trying to win his first Preakness crown.

Even with his defeat at Pimlico, Authentic is still in the hunt for top 3-year-old male honors. The colt has four wins out of six starts this year, all in graded stakes, and his only two losses have been runner-up efforts in Grade 1 events.

Authentic also has a fees-paid berth in next month’s Breeders’ Cup Classic thanks to winning Monmouth Park’s Haskell Stakes (G1) in July.

As for Baffert’s other Preakness runner, Thousand Words faded after getting out to an early lead. The Pioneerof the Nile colt “surrendered leaving the far turn,” per the official chart, and finished eighth in the 11-horse race.

The Preakness marked Thousand Words’ first start since winning Del Mar’s Shared Belief Stakes in August. He was entered for the Kentucky Derby, but scratched minutes before the race after flipping in the paddock.

“I had a good trip,” Geroux said. “I broke on top and went right to the lead but at the half-mile (pole) I had no horse. The filly went outside of me and was the winner, but I was out of horse pretty much early on.”