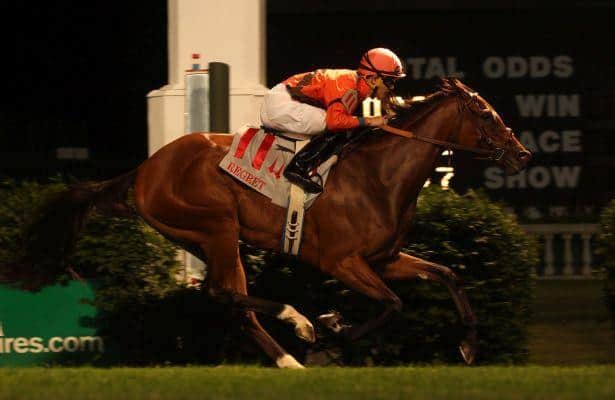 Sanford Robertson’s Auntie Joy, a 3-year-old filly by Uncle Mo, took charge of the pace early on and never looked back winning the 47th running of the $100,000 Regret (Grade III) on Saturday evening at Churchill Downs in wire-to-wire fashion by 1 ¼ lengths.

Trained by Brendan Walsh and ridden by Brian Hernandez Jr., Auntie Joy covered the 1 1/8 miles on a firm Matt Winn Turf Course in 1:49.24.

Auntie Joy set the pace leading the field by a length with a first quarter-mile in :24.02, a half-mile in :49.48 and three-quarters of a mile in 1:14.00 as Wessex tracked a half-length behind in second and 5-2 post time favorite Try Your Luck hugged the rail in third. Around the far turn, Auntie Joy extended her lead to 1 ½ lengths with Wessex on her heels. At the top of the stretch, Auntie Joy opened up by 2 ½ lengths and held off a late charge from Noble Beauty who closed to get second under jockey Julien Leparoux. Try Your Luck took the show spot while Wessex faded to fourth.

The victory was a first graded stakes win for Auntie Joy and was worth $58,900, which increased the filly’s earnings to $147,350 with a record of 6-3-1-0. Prior to her Regret triumph, Auntie Joy was a close second to Catch a Glimpse in the Edgewood (GIII) on the Kentucky Oaks undercard following a fifth-place effort in the Appalachian (GIII) at Keeneland, where she was beaten three lengths behind the same rival.

Auntie Joy, a bay filly born on May 2, 2013, is a daughter of Uncle Mo out of the Forestry mare Rejoicing and was bred in Kentucky by her owner.

BRIAN HERNANDEZ JR., jockey of AUNTIE JOY (first): “We had a great trip. I rode a couple grass races earlier and they made me look a little foolish, kind of taking ahold and nobody was making up any ground. So today, having the outside post like that, we were pretty confident in our filly. And I thought that she’d be able to be kind of forwardly placed. I didn’t expect to be exactly on the lead. But when they let us kind of cruise around there and we got to the backside and I looked up at the Big Board and I saw :24 on it. I was all smiles from that point because she was going to go forward after that and she did.”

BRENDAN WALSH, trainer of AUNTIE JOY (first): “We’re delighted with her. ... She was sitting on a big one, we thought she was and she produced it. We think she's a very talented filly ... and I think she’s got a big future in front of her. ... As she develops, she’s going to turn into a good filly. And now she looks like she can take on the best of them, so we'll find some decent spots, the Belmont Oaks maybe. We’ll have a look at that – a mile and a quarter, it looks like it’d be right up her street. Try and keep her in her own age group this year, maybe. And then, I think when she gets older, like next year, she's going to be a better filly again ... I don’t think we’re near the bottom of her yet.”

JULIEN LEPAROUX, jockey of NOBLE BEAUTY (second): “She ran a big race. We had a great trip. I think just second best today.”

MIKE MAKER, trainer of TRY YOUR LUCK (third as the 2-1 favorite): “Third best. Looked like the race was void of speed and (that’s) the way it turned out.”