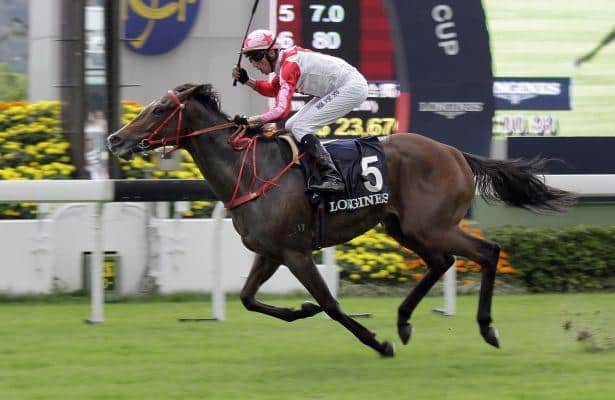 The 2014 APQEII Cup winner enjoyed a steady canter on the inner all-weather track.

Trainer John Moore said: “He’s fit and he’s in good heart but he’s in the twilight of his career now – he’s more of a place chance.”

Cantered on the all-weather track before being paddock schooled.

Trainer Gianluca Bietolini said: “The horse is well and we were keen to walk him up to the saddling area. It doesn't hurt to get the horse used to the new surroundings. We look forward now to Sunday. I felt after his last run (at 1600m) that he would be better suited over further and with a month between that run and this, I have been able to train him up for the 2000 metres at which he’s proven.”

Trainer Noriyuki Hori said: “I have checked his gait this morning after yesterday’s gallop and he was flexible, everything is good. He is settled just like he is at home. He will not require a stall handler on Sunday.”

Stretched out well on the turf course this morning. Hacked one full lap then very gradually built up through a second circuit and quickened off the turn down the home straight, running the closing 400m in 23.3s

Jockey Brett Prebble, who partnered the horse in today's gallop, said: “He gave me a great feel in his work this morning. He’s a lovely horse in top health. He seems to have travelled super and taken no ill-affect from the travel or the change of environment.”

Big-race rider Zac Purton said: “I worked him on Thursday morning, it was an easy piece. The track was rain-affected that morning and it was a little bit hard for him to get his footing, but he seemed to stride through it OK. It hasn’t been an ideal preparation, but Dennis seems to have him going well and I’m sure he will run a good race. The lack of speed is some concern, it looks like it could be a messy race and especially for myself if I’m out the back, it could be even harder but we’ll see what happens.”

Last year’s winner had an easy canter on the inner all-weather.

Trainer John Moore said: “The way he’s working into the race, I couldn't be happier. We’re going in with very high hopes. He’s definitely the one to beat – he’s had a perfect prep.”