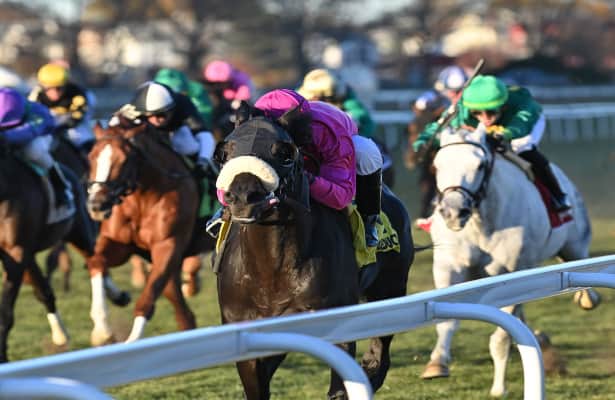 Trained by Tom Albertrani and ridden by Kendrick Carmouche, the 5-year-old son of Quality Road scored the second graded victory of his career and first for his conditioner after rejoining his stable in October.

Astronaut, who began his career with Albertrani in early 2020, moved west to the care of trainer John Shirreffs for his 4-year-old campaign and claimed victory in the Del Mar Handicap (G2) going the Red Smith distance last August. He returned to Albertrani after making his seasonal debut in September at Del Mar and posted a game third-place finish last out in the Grade 1 Joe Hirsch Turf Classic on October 8 at Belmont at the Big A.

“I had him early on in his career before he went to California, and we always did like the horse back then,” Albertrani said. “He always looked like a horse that had talent. He had some good races out in California and I think that one race off the layoff set him up for his last two.”

Astronaut broke sharply from post 4 in the 1 3/8-mile inner turf marathon for 3-year-olds and up and rushed up to claim the lead from Highest Honors to his inside. Astronaut carved out an opening quarter-mile in 24.81 seconds and a half-mile in 49.82 over the firm going, with a keen Cold Hard Cash holding second position over Highest Honors.

The Chad Brown-trained Highest Honors, under strong urging from Irad Ortiz, Jr., began his bid after three-quarters in 1:14.98 and came within striking distance of Astronaut at the top of the stretch, but the pacesetter had something left in the tank and kicked clear as the field passed the eighth pole and crossed the wire three lengths the best in a final time of 2:14 flat.

Highest Honors secured place honors 1 1/4 lengths ahead of Cold Hard Cash, who fended off the late bid of longshot Daunt by a neck. Balthus, Beacon Hill, Mooney Love, Shawdyshawdyshawdy, Soldier Rising, Temple, Reigning Spirit and Dynadrive completed the order of finish. Main-track only entrants Kinetic Sky and I Am the Law were scratched.

Albertrani said he was pleased to see speed from Astronaut after stalking in the Joe Hirsch.

“We were looking for the lead today. We stayed close last time and we thought we might be able to steal it on the lead today,” said Albertrani. “Kendrick did the right thing and made the right choice.”

“The horse ran an amazing race last time in the Grade 1,” Carmouche said. “This time, I wanted to put him into the race and see if they would let me walk the dog a little bit and when he came off the bit around the second turn, I knew I was a winner. I just had to make sure I was still going easy. Tom Albertrani and the owner spotted this horse right and they made us a winner.

“He’s a very funny horse with his mouth, so once you get him on the bit it’s hard to get him off of it,” Carmouche added. “By the time the second turn came around, I dropped his head a little and he relaxed even better. Going into the backside, I knew it was to that point.”

Albertrani said he plans to bring Astronaut south and decide his next start from there.

“This horse has been in great form. John did a great job bringing him over to the East Coast here and I just put the finishing touches on him,” Albertrani said. “He's been in good form and hopefully we keep him that way. Hopefully, we’ll move down to Tampa with him and be choosing between there and Gulfstream with him. We'll see how he settles in when he gets there.”

“He was second best today, but I thought he got a very good trip,” said Brown. “I thought both horses got good trips. Balthus looked like maybe he didn’t handle the turf, he just didn’t fire today. Both horses I thought got great trips and great rides.

“I think both horses will go south for the winter,” Brown continued. “I’ll talk to each individual owner and see what they want to do and if they want to kick on to Gulfstream or just give them a break.”