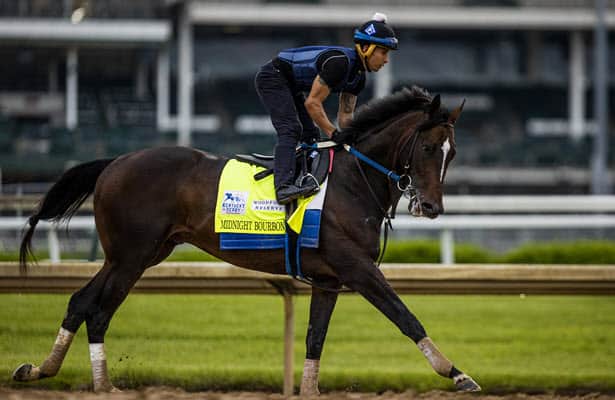 Winchell Thoroughbreds’ Midnight Bourbon, sixth in the Kentucky Derby (G1) after taking second in the Louisiana Derby (G2), resumed training early Wednesday morning. The son of Tiznow jogged around the Churchill Downs track under exercise rider Wilson Fabian for a possible start in the May 15 Preakness Stakes (G1) at Pimlico.

Trainer Steve Asmussen said it was premature to make a final decision on the Preakness but that he’s pleased with what he’s seen so far from Midnight Bourbon since the Derby.

“I’m happy with how he went back to the track,” said the Hall of Fame trainer, who won the 2007 Preakness with two-time Horse of the Curlin and in 2009 with the filly Rachel Alexandra, also voted Horse of the Year. “The racetrack is a little bit wet this morning, but he handled it nicely. There’s no reason to make the decision today. There’s no upside.”

If Midnight Bourbon runs in the Preakness, he’ll need a new rider with Mike Smith riding Concert Tour for trainer Bob Baffert. That is not among Asmussen’s worries.

“There are six less riders in the Preakness than there is the Derby,” he said. “Somehow you figure it sorts itself out.”

Rombauer, Unbridled Honor and France Go de Ina are also expected to run in the Middle Jewel of the Triple Crown. Mandaloun, Caddo River and Ram are on the list of possibles.