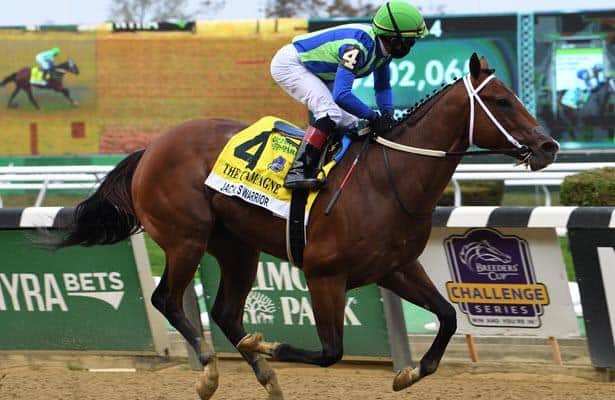 On a mission to get his first Kentucky Derby victory, Hall of Fame trainer Steve Asmussen simultaneously finds himself trying to get a good second turn out of Jackie’s Warrior.

“I think he deserves the opportunity,” he said this week as he looked ahead to Saturday’s Southwest Stakes (G3) at Oaklawn Park — and the chance to avenge a loss to Eclipse Award winner Essential Quality. “He needs to have success.”

He has had no shortage of it. Jackie’s Warrior roared into the Breeders’ Cup Juvenile last November with four wins in as many races, including two Grade 1s. He parlayed a 2 1/4-length victory in the Hopeful at Saratoga into a 5 1/2-length runaway at Belmont Park in the Champagne, a race that earned him a Beyer Speed Figure of 100. Only one other horse from the 2018 North American foal crop — Life Is Good — has a three-figure Beyer on his or her résumé.

All those wins, though, were at one turn. Sent off at 9-10 odds in the Breeders’ Cup, his first two-turn test, Jackie’s Warrior did not get his usual early lead. Despite getting a head in front at the top of the stretch, he was passed by Essential Quality. And Hot Rod Charlie. And Keepmeinmind. Jackie’s Warrior settled for fourth place, 3 1/4 lengths behind.

Asked after the race whether going two turns was still a doubt for Jackie’s Warrior, Asmussen said, “I think it will be until he wins.”

With nearly four months of hindsight and context, Asmussen said it was important to remember the high level of competition last fall at Keeneland.

“You beat somebody, and then you say, ‘I told you so,’ ” Asmussen said to HRN and VSiN’s Friday racing podcast. “People don’t take into account who you’re running against or the circumstances.”

Aside from the forecast of weekend rain for Saturday’s twice-postponed Derby points prep at Arkansas, the circumstances will not change much. Joel Rosario still rides Jackie’s Warrior. The race is still 1 1/16 miles. It still has two turns. And it still has Essential Quality.

“You’ve got the 2-year-old champion, and I think we’ll have our work cut out for us,” Asmussen said. “I have all the faith in the world in Jackie’s Warrior’s ability. He’s been training impressively as he has his whole life, and we’re anxious to get his 3-year-old year started.”

One new wrinkle is Spielberg. Trainer Bob Baffert is shipping the inscrutable $1 million colt from California to Arkansas in hopes of improving on a fourth-place finish in the Robert B. Lewis Stakes (G2).

The seven-horse field also includes Jackie's Warrior stablemate Saffa’s Day. The $125,000 Carpe Diem colt finished a combined 26 1/2 lengths up the track in his two previous stakes starts. Chasing the pace in a maiden race last month, he was a narrow winner going a two-turn mile on the same track where Saturday’s race will be run.

“He’s a horse that’s 1-for-1 at Oaklawn,” Asmussen said. “Oaklawn can be a unique course. This time of year with 3-year-olds there’s a lot of change in them. He’s a happy, healthy individual, and it’ll give him an opportunity to see where he stacks up moving forward.”

If bettors and bookmakers are the chosen prism through which Derby contenders are measured, Jackie’s Warrior is still Asmussen’s top contender. He is best priced in Nevada at 50-1. Among his stablemates, Midnight Bourbon is 60-1, Cowan 100-1, Super Stock 200-1 and Saffa’s Day 250-1. In contrast, Life Is Good is the consensus favorite at 7-1 with Essential Quality next at 9-1.

Not only is Asmussen looking for his first Kentucky Derby victory in 20 years of trying, he also is chasing records. Coming into the week with 9,200 career victories, he trails only the late Dale Baird’s 9,445 in the North American standings. Asmussen was well aware that at his current rate of winning, he should catch and pass Baird around Labor Day.

He also was aware of Peruvian trainer Juan Suárez Villarroel, who, according to Página de Turf, holds the world record of 9,746 and counting. Asmussen, though, is winning at twice the rate of Suárez Villarroel. A little algebra reveals that record may fall at the end of 2022.

“I better keep confident,” Asmussen said. “I’m all for it. Like I always say, if it didn’t matter, why do they keep track?”

Friday: An HRN Barn Tour of the Asmussen stable.