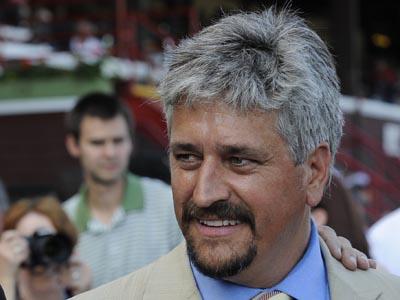 Steve Asmussen, who is wintering for the second consecutive year at Santa Anita with 40 horses, is anxiously awaiting opening day. America’s leading trainer by races won, Asmussen oversees a national stable that wins races by the thousands. For instance, on Dec. 6, 2009, he set a single-season mark of 623 wins, breaking his record of 622 set the previous year.

The 46-year-old native of South Dakota became one of only five trainers to win 6,000 races in his career when Basalt won the first race at Remington Park on Nov. 18.

Next Monday, when Santa Anita begins its 75th anniversary meet, Asmussen plans to have not one, not two, but three starters in the day’s marquee race, the Grade I, $300,000 Malibu Stakes for 3-year-olds at seven furlongs. They are: Light Up the Score, Rothko and Wine Police.

Rothko’s recent record is the most impressive of three. The bay colt by Arch owned and bred by Padua Stables has won his last three races by a combined margin of 15 lengths, all on dirt surfaces: at Saratoga, Monmouth Park and Churchill Downs.

Like Rothko, Light Up the Score will be making his stakes debut in the Malibu. The homebred son of Even the Score owned by Millenium Farms broke his maiden in the slop at Churchill Downs on Nov. 3, then came back to win on a fast track under the Twin Spires by nearly three lengths.

Malibu nominee Indian Winter will pass the race for an allowance race down the road, according to Jerry Hollendorfer assistant Dan Ward. “We’ll stretch him out after that,” Ward said of the San Pedro Stakes winner.

Associate, winner of his two starts by a combined margin of nearly 19 lengths since being claimed for $35,000 by Richard Dutrow Jr., has bedded down at Santa Anita with trainer Doug O’Neill at Barn 88.