'Asking a lot': Kevin's Folly takes a step up in Hopeful 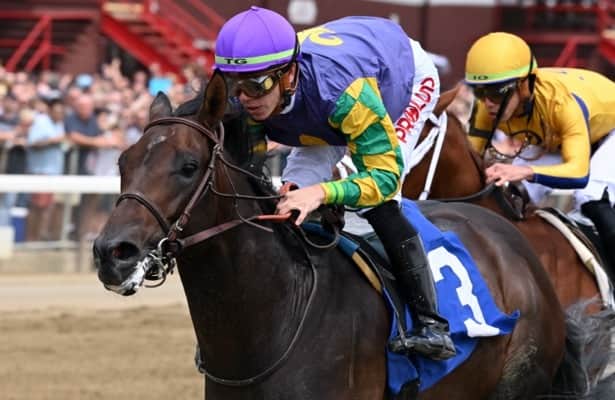 The Distorted Humor colt, bought by Michael McLoughlin for $80,000 at the Keeneland September Yearling Sale, registered a 69 Beyer in his winning debut sprinting 5 1/2 furlongs on July 31 at Saratoga.

With Tyler Gaffalione up, Kevin's Folly was in fifth position at the half-mile call before cutting the corner and powering home to a 1 1/2-length score in a field of six.

Amoss said the horse was training too well to wait on a two-turn race later in the fall.

"I know I'm asking a lot of him, but the timing is so poor to save him for the middle of the month for Churchill going two turns off that one race," Amoss said. "We always thought he was talented. What I liked about him on debut is that he rated, he took dirt and he came through on the inside through a very small opening, so he was very professional. He galloped out well. I saw a lot to like about him off his debut."

Amoss said he is hopeful that Kevin's Folly will be able to work out a trip when exiting post 9 under Jose Lezcano in a race led by graded-stakes winners Wit and High Oak.

"He's shown he'll rate and sit behind horses, so both those things are plusses, but I have nothing but the ultimate respect for Wit and High Oak. This is a very good race," Amoss said.

Joel Politi's Li'l Tootsie closed to finish third for Amoss in Saturday’s Prioress (G2), a six-furlong sprint for sophomore fillies at the Spa.

Amoss said he was pleased to see the Tapiture bay, a three-time winner in nine starts, pick up graded black type.

"That's what we were hoping for. She ran well," Amoss said.

Maggi Moss and Greg Tramontin's graded-stakes winner No Parole posted a bullet half-mile in 47.21 Saturday on the Saratoga main track.

The 4-year-old Louisiana-bred son of Violence won the Woody Stephens (G1) last year at Belmont Park. He has made three starts this season, including a win in the LA Bred Premier Sprint in February at Delta Downs.

Amoss said No Parole, who finished seventh last out in the Count Fleet Sprint Handicap (G3) in April at Oaklawn, is working his way back to race fitness having breezed four times at Saratoga.

"He's coming back off a layoff. He should be ready by the end of the month to find a race. I'd like to get him back into form and make him a stallion in Louisiana," Amoss said.

Out of the stakes-winning Bluegrass Cat mare Plus One, No Parole was purchased for $75,000 at the Keeneland September Yearling Sale. His third dam, Star Deputy, produced multiple graded stakes winning millionaire License Fee.