Damon's Mound moves to 2-for-2 in Saratoga Special 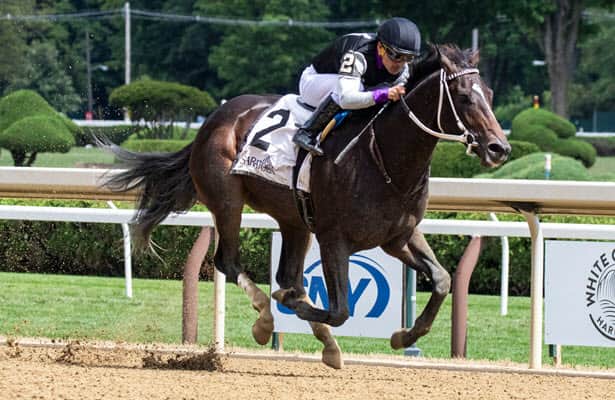 The lightly raced son of Girvin entered Saturday’s contest from a visually-impressive 12 1/2-length debut maiden score on July 2 at Churchill Downs, an effort that was enough to see him sent to post as the 9-5 second choice in the field of four with Bashford Manor winner Gulfport slightly favored.

Damon’s Mound was guided to victory from post 2 by returning rider Gabriel Saez, settling in behind his three rivals as they bunched up in a battle for the lead. Super Chow, who broke well from the inside post with Luis Saez up, came away with the advantage through the first quarter-mile in 21.94 seconds over the fast main track with Valenzan Day backpedaling from second position.

As the field rounded the turn, Gulfport came under a ride from Joel Rosario in between a rail-skimming Super Chow with Damon’s Mound pursuing to his outside through a half-mile in 45.06. Gulfport was forced to check hard as Super Chow came under urging from Luis Saez and drifted out into Gulfport’s path. Damon’s Mound maintained his path and took over at the top of the lane, powering home under steady urging from Gabriel Saez to score a professional 3 1/4-length win over Gulfport in a final time of 1:17.94.

It was another seven lengths back to Super Chow in third with Valenzan Day finishing a distant fourth. Owen’s Leap was scratched.

Damon’s Mound was the first Saratoga starter for Lovell, who said the bay colt’s trip was exactly what she had been hoping for.

“It was perfect. I was so happy where we were laying, where we were tracking,” said Lovell. “And then Gabe couldn’t hold him any longer and he just let him creep on up there and make his little move. He did his job.”

Saez echoed Lovell’s sentiments, adding that Damon’s Mound was there for him when he asked.

“He broke a step slow. Next thing I know he's moving along,” Saez said. “So, for a three-horse, four-horse field, not too much traffic and I was able to squeeze him out into the clear and make my move when I really wanted to and when I asked him to kick that gear, he did it and we turned for home and I switched leads and he was gone. He came home nicely and comfortably.”

“It’s incredible. All props to the horse,” Lovell said. “He’s just awesome and he proved it and spoke for himself. I couldn’t be happier for his owners. They’re breeders, they (didn’t sell him), and they got rewarded for it. I wouldn’t have traded him for any horse. I thought he had an awesome chance, and he showed it. I’m glad he did.”

Lovell said she was confident in her horse going into the race, but praised the Steve Asmussen-trained Gulfport for the talents he showed in going 2-for-2 to start his career.

“The connections (of Gulfport) speak for themselves. Steve Asmussen is an awesome trainer, and the owners have been in the business a long time,” Lovell added. “Their horse is a real well-bred horse and ran two beautiful races, so we had our work cut out for us. But I thought our horse would step forward and that would get us there.”

The win was the most prestigious of Lovell’s training career since going out on her own in 2003. Her previous best scores came in Grade 3 company with the mare Change of Control in last year’s Intercontinental at Belmont Park and Franklin County at Keeneland. She also scored in the 2017 Pucker Up at Arlington Racecourse with Fault.

“It’s a Grade 2, so it’s my biggest accomplishment with a horse with so much potential,” Lovell said. “My other horses that we’ve won graded races with have been close to my heart and I’m so proud of them.”

Lovell said she will weigh all her options before deciding on a next start.

“I think he has a huge future. We have a couple spots. Obviously, there’s the Hopeful, the Iroquois, the Breeders’ Futurity. Those three races are on the calendar,” Lovell said. “We’ll see. We’ll cool him out and see what we’ve got. He’s been a super sound and mature animal, and I just look forward to his future.”

Rosario said Gulfport was compromised by having to steady in the turn.

"It looked like we had no room in there. The horse on the inside and I couldn't really tell if the outside (horse) both came out at the same time and I had to check my horse,” Rosario said.