Ferrer, Monmouth's leading rider, on safety and strategy without crop 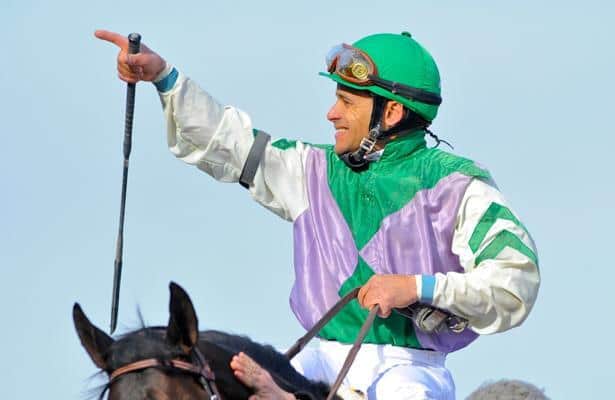 Entering week three of the 53-day Monmouth Park meet, the first in North America to ban use of the riding crop for encouragement, it's 57-year-old Jose Ferrer who sits atop the jockey standings.

The veteran reinsman has tallied nine wins from 36 starts through the first six days of racing while finishing in-the-money with 61 percent of his mounts. It’s been a fast start for Ferrer, but it has not come easy given the strict crop rule at Monmouth.

“It’s been tough,” Ferrer told Horse Racing Nation this week. “You have to have communication with the horse. For 37, 38 years that I’ve been riding, the whip was the tool we used to communicate. At the top of the shoulders, the back. It lets them know it’s time to go. It’s like a boxer in the last round. It’s time to give everything we got. Now, we don’t really have that.”

This season, Monmouth Park entered a bold new era following a mandate from the four-person New Jersey Racing Commission that bars use of the riding crop in the state other than for matters of safety. Ferrer, who has won 4,568 races with purse earnings of nearly $80 million, attributed his early Monmouth success to lessons learned decades ago. “When I first started in the 80s, my first lesson was hand ride. Hand ride, hand ride, hand ride,” Ferrer said. “I feel in the 90s and 2000s, it was the new generation and there became a lot of riders where the whip took its place. They started whipping like crazy. They didn’t have the foundation and depended on the whip.

“But back in the 70s and 80s, look at replays,” Ferrer added. “Guys like [Rudy] Baez, [Laffit] Pincay. These are Hall of Fame-caliber riders. Best in the world. They barely used the whip.”

Click here for Monmouth Park entries/results
When the new crop rules were put in place at Monmouth, a handful of its top jockeys decided against riding the meet. Most notably, perennial leading riders Joe Bravo and Antonio Gallardo went elsewhere. Both cited safety concerns for not riding at Monmouth. However, for Ferrer, he said his concerns over safety have waned as the meet has moved forward.

“At the beginning I was a little worried, but then when I started riding I felt comfortable out there,” Ferrer said. “We are all in the same boat. It’s not like this guy can hit and this guy can’t. I’ve told the guys, it’s a different kind of riding now. We have to protect each other a little more. It’s doable, you just have to be a little more careful.”

With the crop no longer allowed for encouragement at Monmouth, handicappers have been left to determine how it will impact a horse’s form, as well as what kind of running style could possible benefit. Do front-runners hold an edge if jockeys on closers are unable to use the crop down the stretch? Can front-runners hold their speed without encouragement from the crop?
In Ferrer’s mind -- and as the race charts indicate -- there has been no discernible bias in either matter. “No, I’ve won a couple of races coming from behind and I’ve won a couple on the lead,” Ferrer said. “You can win either way. With that said, if you come from way back and have a lazy horse, a horse that needs encouragement, that’s when you’re in trouble. I’ve had a couple horses come back not even tired. Barely blowing. You know they did not go all out.” While running styles have managed to play relatively even, taking away the crop for encouragement has forced jockeys to make adjustments to their strategy. In Ferrer's case, this has most notably come during the early parts of races. “You can’t be as physical, say during the first couple hundred yards,” Ferrer said. “You have to be more still because there is no way you can be physical, moving hands and riding really hard at the start and then have something left down the lane. It’s impossible. So what I’ve done is to be quiet. I was always an aggressive rider. Now I kind of sit quiet, at least until the three-eights pole or the quarter pole. So then, down the lane, I have strength in my body to help the horse. Hand ride, hand ride, hand ride.” The Monmouth Park stakes schedule starts to heat up this weekend with the Salvator Mile (G3) on Saturday and Pegasus Stakes on Sunday, which will feature Kentucky Derby runner-up Mandaloun and jockey Florent Geroux both coming to town. Ferrer believes the strict crop rule will prove particularly onerous for riders coming to Monmouth. “I think for those guys, they are going to have problems coming to Monmouth and just changing overnight. That’s not easy,” Ferrer said. “But it’s like anything, the more you do it the more you learn to adjust.” While the first two weeks of the Monmouth meet has been a success for Ferrer, he maintains New Jersey's strict riding-crop rule is not good for the long-term health of the sport in the state. It simply takes away too much of its competitive nature. “You won’t see the best performance out of these animals -- that’s what’s really going to hurt our sport here in New Jersey in the long run,” Ferrer said. “We coach these horses, that final quarter mile, tap them on the shoulders and let them know, ‘We have to go.’ It’s time for 110 percent. Horses don’t understand language. You can’t just tell them, hey let’s go. That’s what we’re really going to miss.”