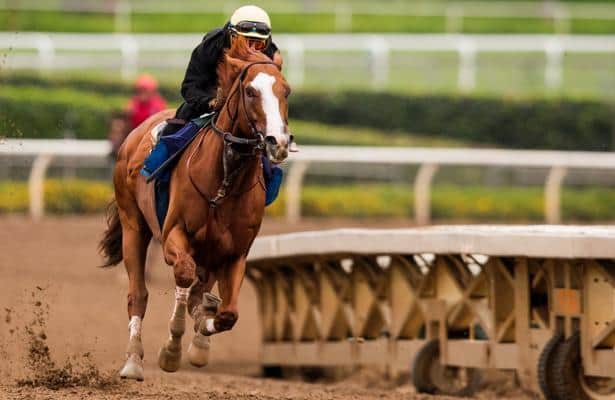 Catalina Cruiser, whose only loss in eight career starts came in last year’s Breeders’ Cup Dirt Mile, will look to avenge that defeat without a final prep race.

While trainer John Sadler plans to enter sprinters Flagstaff in the Santa Anita Sprint (G1) and Selcourt in the LA Woman Stakes (G3) this weekend at Santa Anita, he said Catalina Cruiser will be kept out of the starting gate until Breeders’ Cup on Saturday, Nov. 2.

Catalina Cruiser is a lightly-raced 5-year-old who has made just three starts this year, beginning with a win in the True North (G2) at Belmont Park in June. The son of Union Rags then won the 1 1/16 miles San Diego Handicap (G2) in July and followed with a narrow victory over Giant Expectations in the seven-furlong Pat O’Brien Handicap (G2) at Del Mar on Aug. 24.

Sadler has carefully campaigned Catalina Cruiser during his three years of racing and he’s continued that approach heading into the Breeders’ Cup. Catalina Cruiser drilled five furlongs at Santa Anita in 1:00.40 on Saturday.

“He came out of the work great and is going to go to the Breeders’ Cup Dirt Mile,” Sadler said. “But he won’t prep for it. We’re going to train up to the race.”

Owned by Hronis Racing, Catalina Cruiser split the field in last year’s Breeders’ Cup Mile at Churchill Downs when checking in sixth behind winner City of Light. He figures to be one of the top betting choices in this year’s edition give his current form and the fact it’s at his home track where he’s a two-time winner.

Sadler, who has Higher Power bound for the Breeders' Cup Classic off a third in Saturday's Awesome Again Stakes (G1), is also looking to earn possible championship berths for the talented but unproven duo of Flagstaff and Selcourt.

Flagstaff will be making his stakes debut in the Sprint Championship for Lane’s End Racing and Hronis Racing. A 5-year-old son of Speightstown, Flagstaff has two wins and a runner-up finish in three starts versus allowance company this season.

“Flagstaff is a horse that has really good figures and has won his last two, so we’re looking forward to seeing what he can do,” Sadler said. “He’s been coming up through the conditions and seems ready to take the next step.”

Selcourt is another relatively lightly-raced 5-year-old who is looking to earn a second entry into the Breeders’ Cup Filly & Mare Sprint. Last year, she won the Las Flores Stakes (G3) and Santa Monica Stakes (G2) before finishing 12th in the Breeders’ Cup.

A daughter of Tiz Wonderful owned by Medallion Racing and Keith Abrams, Selcourt will be entering Saturday’s 6 ½-furlong LA Woman off a more than six-month layoff. She has been sidelined since finishing fourth in the Beholder Mile Stakes (G1) at Santa Anita on March 30.

“These are going to be her last couple of starts and then she’s going to be a mommy in 2020,” Sadler said.