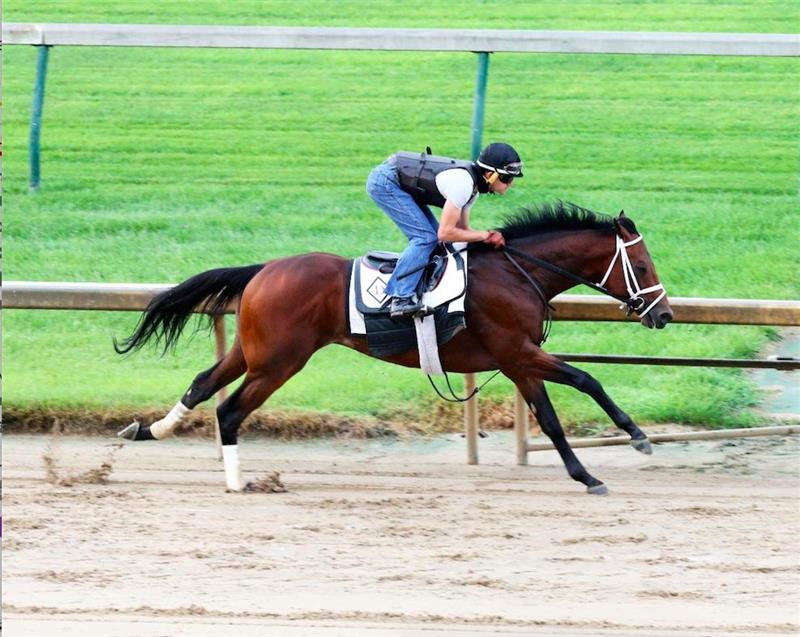 Bruce Lunsford’s Art Collector, winner of Keeneland’s Grade 2 Toyota Blue Grass, had his final major training move Saturday morning at Churchill Downs, working a methodical half-mile timed in 48 4/5 seconds in preparation for the $200,000 Aug. 9 Ellis Park Derby. Brian Hernandez Jr. was aboard Art Collector, one of the favorites for the Sept. 5 Kentucky Derby.

Churchill Downs clocker John Nichols timed Art Collector going splits of 12 4/5 seconds for the first eighth-mile and picking it up for the half-mile in 24 3/5 while galloping out five-eighths of a mile in 1:01 1/5 and six furlongs in 1:14 4/5 over a track rated muddy. The final time of 48 4/5 was the third-fastest of 18 workouts at the distance.

“Everything went well,” Hernandez said. “You hear it all the time that they’re right where you want them to be, but he seems like he is. You just let him do his thing. He’s just so intelligent. All I’ve got to do is just stay out of his way. I put him down on the rail, and he went around there just like he wanted to: with his ears up and on a long line just cruising along.”

“The track was a little off this morning, and we certainly didn’t want to overdue it on that racetrack,” he said. “I just told Brian to cruise along and be happy doing it, and that’s exactly how he looked. Exactly what we were looking for. He came back and took one big breath, and that was that. I think all systems are go at this point. Now we just have to keep him happy and healthy until race day.”

Drury said running in the 1 1/8-mile Ellis Park Derby allows him to go a bit lighter in Art Collector’s daily training, given the summer heat, leading up to the Kentucky Derby.

“This morning was a perfect example of that,” he said. “Our horse is fit. We didn’t need that five-eighths in 59. We needed a nice maintenance half-mile, a decent-enough gallop out, let him get enough out of it. We weren’t looking to turn the screws on him a whole lot. We don’t need to. We just ran at Keeneland, we’re going to run next weekend at Ellis. Everything we’re doing, it just allows us to do a little bit less, a little bit easier. I think at the end of the day, that stuff kind of adds up and is beneficial to him.

“Like today, the track became a little bit of an issue, just because we’ve had so much rain. So being able to let him cruise around there this morning with his ears thrown up, that’s a good thing.”