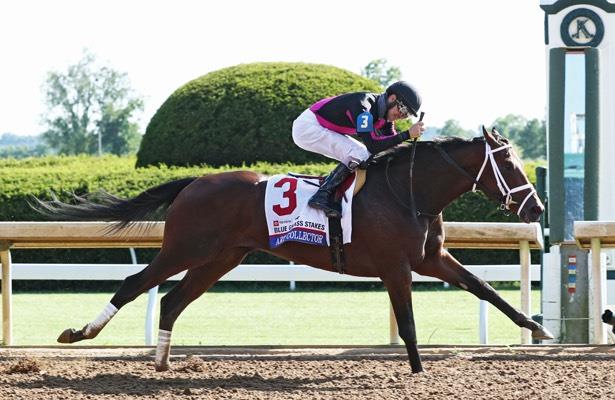 Bruce Lunsford's homebred Art Collector earned himself a coveted spot in the Kentucky Derby starting gate with an open-lengths victory over filly Swiss Skydiver in the $600,000 Blue Grass Stakes (G2) at Keeneland Race Course on Saturday.

Providing a first career graded stakes win for trainer Thomas Drury Jr., Art Collector and Brian Hernandez Jr. stalked a couple lengths back of Swiss Skydiver as the favored filly took the field through fractions of :23.25 and :46.61 for the opening half mile. Swiss Skydiver continued to motor on the lead through six furlongs in 1:10.63 and when turning for home, it was down to a two-horse race between her and Art Collector.

Swiss Skydiver battled on gamely, but Art Collector on the outside steadily chipped into the lead before drawing even and spurting clear in the final sixteenth of a mile to win going away by 3 1/2 lengths. Art Collector, whose only previous graded stakes try came in last fall's Bourbon Stakes (G3) at Keeneland, completed 1 1/8 miles on a fast track in 1:48.11. He paid $6.60 as the slight second choice.

With the win, Art Collector earned 100 qualifying points towards the Kentucky Derby, which figures to be enough to make the field for the American classic on Sept. 5 at Churchill Downs. Art Collector was followed across the wire by Swiss Skydiver (40 points), Rushie (20) and Enforceable (10).

Art Collector with 100 points is now tied for third with Authentic on the Kentucky Derby leaderboard behind Tiz the Law and Honor A.P.

Trainer Ken McPeek indicated Swiss Skydiver would be put back on the Kentucky Oaks trail.

“She ran super," McPeek said. "Art Collector was the horse I was worried about. He is obviously really good and really talented right now. I thought if she was going to get beat, it would be by him. I am happy for Tom Drury. He works hard, and he has been at it a long time.

“Her fractions were pretty taxing, but she is fast," McPeek added of Swiss Skydiver. "She is so special. We might lean against going to the Derby. We might go to the Alabama (G1) and consider waiting for the Kentucky Oaks (G1).

By Bernardini, Art Collector won a maiden and allowance race last year as a 2-year-old while under the care of trainer Joe Sharp. Subsequently transferred to Drury for his sophomore season, Art Collector resurfaced at Churchill Downs this spring and won consecutive allowance/optional claiming events, including a front-running, 6 1/2-length tour de force going 1 1/16 miles on June 13.

"He’s a really good horse," said Hernandez, who has been aboard Art Collector for his last six starts. "If you go back and watch all his replays, he’s just a very athletic horse. I think one of the most impressive races he ran was the day at Churchill he got shuffled around and almost fell down. I almost pulled him up, but he ran again. From that day on, we always believed he was a really good horse. It’s been a fun ride.”

Hernandez also said he feels the 1 1/4 miles of the Kentucky Derby should not be a problem for Art Collector.

"No. You see him today going a mile and an eighth," Hernandez said. "They’re all 3-year-olds, and we’re all going to be trying to go a mile and a quarter. We’ve got one of the Derby favorites now, so you’ve got to be excited.”

Drury also reflected on his time with Art Collector and winning his first graded stakes.

“It’s been a little bit of a roller coaster ride," Drury said. "Everybody was fighting the same thing with COVID-19 and the uncertainty. I’m at a loss for words. It takes a village to get these things; there’s a lot of people who have done their part. I’m just honored to be able to share this with my staff and everyone that worked to get him here.”

He added thoughts of having a horse in the Kentucky Derby will wait until Sunday.

“It took me my whole life just to get to this one win," Drury said. "I’m going to enjoy this one and we’ll worry about that tomorrow.”