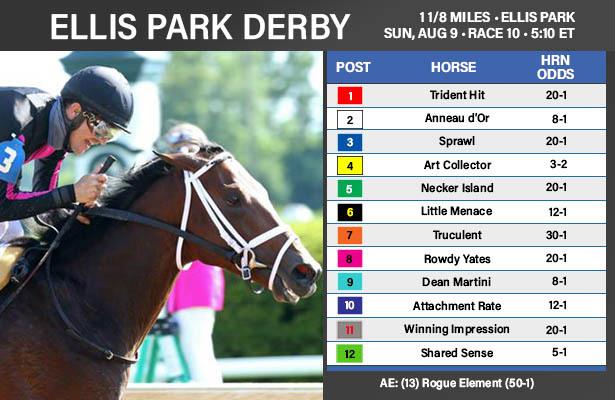 “It’s Art Collector and all the rest,” said trainer Tom Amoss, who will try to pull off the upset with Grade 3 Ohio Derby victor Dean Martini. “You’ve got a really strong favorite in this race, and I think everyone will measure the quality of their horse with how they perform against him.”

The 1 1/8-mile Ellis Park Derby carries 50 points to the winner toward qualifying for the COVID-delayed Kentucky Derby on Sept. 5. Also earning qualifying points will be the runner-up (20), third place (10) and fourth (5).

Art Collector drew post 4 as he seeks to go to 4 for 4 since being turned over to trainer Tommy Drury this year. Thanks to the Blue Grass’ 100 points, owner-breeder Bruce Lunsford’s colt already has enough points to ensure a spot in the 20-horse Kentucky Derby field, with Drury using the Ellis Park Derby as a conditioning tool rather than training the eight weeks up to America’s most important race.

“His first couple of wins, he just ran off the screen both times, certainly didn’t have to overexert himself,” Drury said of Art Collector. “The Blue Grass, he had to earn it; that filly (Swiss Skydiver) made him work for it. Watching that race and evaluating the race afterward, I felt one more was going to be beneficial to him. I’m just really thankful that spot at Ellis is available. We were late getting to the party and we’ve needed every little thing to fall in place to get him to this point. For Ellis to have a Derby prep this year was a lifesaver to us.”

Shared Sense could be on the Derby qualifying bubble points-wise, collecting 20 for winning the Grade 3 Indiana Derby in his graded-stakes debut. Godolphin’s son of 2007 Kentucky Derby winner Street Sense faced Art Collector two races back, when Art Collector controlled the speed for a dominant win over Shared Sense in a four-horse Churchill Downs allowance field.

“First time we ran against him here, we were at the back of the pack, there was no pace,” said Brad Cox, Shared Sense’s trainer. “I was pleased with the effort. They almost broke the track record; the track was quick. Honestly, we were the second-best horse that day. He bounced out of it in good shape. We turned our attention to the Indiana Derby and it worked out extremely well. Obviously the other horse went on to pick off a Grade 2 at Keeneland very impressively. Both horses seem to be going the right way right now, and I’m excited about Sunday.”

Saturday’s $1 million, Grade 1 Travers Stakes at Saratoga, where Belmont Stakes winner Tiz the Law looms as the big favorite, also was a possibility for Shared Sense.

“If we’re dreaming about the Derby, I think with my horse I would be comfortable trying to get a nice mile-and-an-eighth race into him four weeks before the Derby as opposed to a mile and a quarter at Saratoga,” Cox said. “That’s a pretty demanding course, and that’s a big ask four weeks before you’re hopefully going to run the biggest race of your life.”

Because he wasn’t nominated earlier in the year, Godolphin would have to pay $45,000 to make Shared Sense a supplemental nominee to the Kentucky Derby, on top of entry fees.

The same is true for Dean Martini, who was claimed by his owners Raise the BAR Racing out of a $50,000 maiden-claiming race May 17. The gelding actually started his career with a second at Ellis Park but needed seven more attempts to win, albeit while accumulating three seconds and three thirds. Dean Martini won the Ohio Derby in his second start for his new connections.

“We need to know if he can validate his Ohio Derby performance,” Amoss said. “It was a very good race, but is he consistently the kind of horse who can put in those kinds of performances? We need to find out, and we’re going to do that on Sunday. Obviously with a horse like Art Collector in there, it will validate one way or the other where we need to head for our next race.”

If the Ellis Park Derby is a first for the racetrack as far as being a Kentucky Derby prep race, count Cox among those hoping that it’s also the last.

“Unless we start running at Ellis earlier in the year,” he joked. “I hate to say it, but hopefully it’s a one-time thing. I like the Derby in May, not September. “

Still, Cox believes the 2020 running is a great start in entrenching the Ellis Park Derby among the regional Derbys that populate racing after what normally is the Triple Crown.

“West Virginia, Ohio, Indiana, Iowa, Oklahoma — There are a lot of Derbys out there,” he said. “There’s definitely a spot on the calendar where Kentucky could have a nice 3-year-old race like the Ellis Park Derby and it become a graded event. Hopefully this is the start of something bigger and better for the Ellis Park Derby.”