After 'dream summer,' Art Collector is back for more in '21 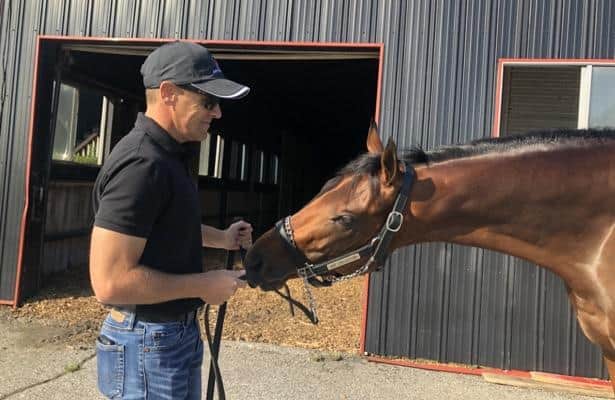 Tommy Drury was close to one of the peak moments for a Thoroughbred trainer last year. A week before the Kentucky Derby, Art Collector was expected to be one of the top choices in the race after winning both the Blue Grass Stakes and Ellis Park Derby.

Then, just before the post draw, Drury pulled him out, citing a minor injury that would need medication not allowed so close to the race. In doing so Drury missed out on an experience he had been looking forward to.

“The biggest thing I wanted to do was be able to make the walk over with my kids and put the saddle on the horse in that race one time,” Drury said. “It didn’t work out.”

Speaking with HRN on Monday at Skylight Training Center near Louisville, Drury said he still managed to have the run of a lifetime with Art Collector, who finished the season by running in the Preakness and the Breeders’ Cup Dirt Mile.

“As far as I’m concerned it was a dream summer for us,” Drury said. “There really wasn’t a lot of time to feel sorry for ourselves. We had to get right back to work.”

Drury said that, after the Breeders’ Cup, Art Collector was sent to South Carolina for rest. He recently returned to Kentucky, where Drury said he will be monitored before returning to the work tab.

Drury said he does not have any concrete return race in mind for the colt’s 4-year-old bow. In the meantime, Art Collector will do some aqua treading and swimming at a facility in Lexington.

“When he looks like he’s ready, we’ll bring him from there to here,” Drury said. “I don’t have anything in mind for him other than to do right by him and let him come at whatever pace he needs to come at.”

A pleasant side effect of Art Collector’s success has been more attention for Drury. He said he has trainees coming down the line who he is excited to have.

“Nothing I would want to mention by name at this point,” Drury said. “But I definitely noticed Art Collector opened some doors for me. I think we’ve got a better-quality 2-year-old this year. Art Collector’s little brother is actually in Ocala right now, and he’s broken training and is going to be coming to us.”

Does Drury feel more pressure with the increased success, specifically with Art Collector?

“I do,” he said. “But it’s all pressure I put on myself. When you’re in the industry for such a long time, and you finally get that big opportunity, you can’t help but put pressure on yourself.”