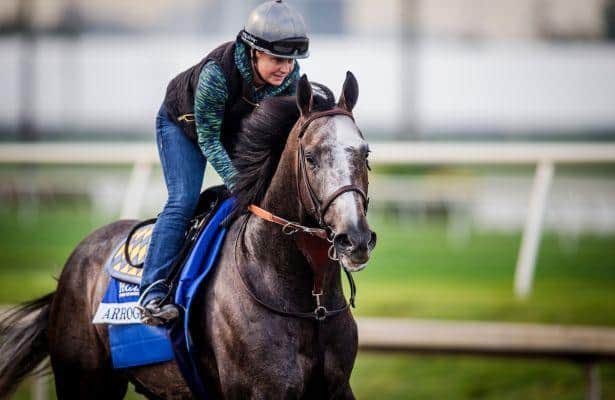 Arrogate traveled six furlongs in 1:13.20 with Uninvited, the same horse the son of Unbridled’s Song appeared to have trouble catching and passing in last week's drill. This time, Arrogate moved by in the stretch.

Following a move last Tuesday, it was announced the same day that the Nov. 4 Classic at Del Mar will mark Arrogate’s career finale before he heads to stud at Juddmonte Farms in Kentucky.

To some pundits, the news' timing cast doubt on Arrogate's chances at a repeat in the $6 million race combined with his recent form: back-to-back defeats over the Del Mar dirt.

Expected to be the second morning line choice for the Classic, Arrogate wasn’t the only star working Monday. Steve Asmussen-trained Gun Runner clocked five furlongs in 1:00.40, also at Santa Anita, with jockey Florent Geroux in the irons.

An earner of more than $17 million, Arrogate has won four Grade/Group 1 events, all at different tracks: last year’s Travers Stakes and the Classic before the inaugural Pegasus World Cup and Dubai World Cup.