Arrogate in good company as a late blooming three-year-old 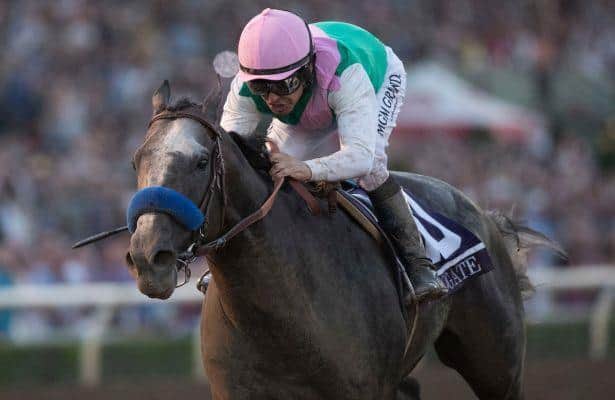 Arrogate put on quite a show as a late-blooming three year old, winning the Travers Stakes in record time, then defeating California Chrome in the stretch of the Breeders’ Cup Classic for an encore. For a colt that was unraced as a two year old and was still a maiden until June, he will most likely be named the Eclipse Award-winning three year old colt when the hardware is distributed next January.

By Unbridled’s Song and the first foal out of a Distorted Humor mare named Bubbler, Arrogate is not the only top son or daughter by Unbridled's Song to be a late bloomer. He could also join three other historic colts who were late-developers that went on to win Eclipse Award honors in their sophomore year.

It should be noted that although his sire got off to a hot start, winning two of his three races as a two year old--including the Breeders’ Cup Juvenile--Arrogate’s progression timeline was more like that of his dam.

Bubbler was also unraced at two and didn’t make her debut until September 7th as a three year old. However, she won her first three races, then won three of her last five career starts to finish with six wins in nine tries--including being graded stakes placed in her final race at four.

Arrogate finished third in his debut at Los Alamitos on April 17 then broke his maiden at Santa Anita in his next outing on June 5th. He would be victorious in his first two tries in allowance optional claiming company at Santa Anita and Del Mar, respectively, before making a huge stride by winning the Grade I Travers while setting a Saratoga track record at ten furlongs. He was the first to run ten panels in under two minutes in the Travers’ 147 year history.

Prior to the Breeders’ Cup Classic earlier this month, few expected Arrogate would improve on his historic Travers victory by defeating California Chrome and the seven other contenders that made it to the gate on that Saturday at Santa Anita (I, for one, did not think he could)--but he did.

Unbridled’s Song is a sire for the ages, and has had some other very good progeny develop a little later than others, including:

Foaled in 2006, this filly out of a Bertrando mare named Queenie Belle also made her debut as a three year old in April. Like Arrogate, she broke her maiden in her second try, then won in her first try against winners next out in October.

Trained by William Mott, she would win in her third try at a graded stakes with a victory in the Grade III Rampart Stakes at Gulfstream in March of 2010.

Unrivaled Belle would have seven career starts after her Rampart win, never finishing off the board, while capturing two more graded stakes, including the Grade I 2010 Breeders’ Cup Ladies’ Classic (now the BC Distaff).

Out of a mare by Dehere named Sweetest Smile in 2009, Graydar also was unraced at two. He made his debut in April of 2012, winning at Gulfstream Park. Finishing third in allowance company a full five months later, the gray colt would then come back to Gulfstream to win in his three year old finale.

Also trained by Todd Pletcher, Liam’s Map was foaled in 2011 out of Miss Macy Sue, by Trippi.

The gray colt didn’t make his debut until August of 2014, where he finished second in a maiden special weight race at Saratoga. He would break his maiden one month later at Belmont.

Liam’s Map’s final two races of his three year old campaign were victories in an allowance race at Aqueduct, then taking the non-graded Harlan’s Holiday Stakes at Gulfstream.

Finishing second in his first graded stakes attempt (losing to Honor Code in the Grade I Whitney at Saratoga), Liam’s Map would win the Grade I Woodward Stakes before capturing the 2015 Breeders’ Cup Dirt Mile at Keeneland.

He was then retired and stood as a freshman stud at Lane’s end in Kentucky.

Although it can be argued that Will Take Charge doesn’t exactly fit the criteria of a “late bloomer”, this 2010 colt by another Dehere mare named Take Charge Lady and Arrogate have some similarities.

Each colt won in their second try at the maiden special weight level, but Will Take Charge graduated as a two year old.

Both would win the Travers, with Will Take Charge besting race-favorite Verrazano, Kentucky Derby winner Orb, and Belmont Stakes winner Palace Malice in the 2013 edition at Saratoga.

Will Take Charge and Arrogate both ran in the Breeders’ Cup Classic as three year olds, with Will Take Charge finishing a nose away from taking the title from Mucho Macho Man.

Should Arrogate win the Eclipse Award as Champion three year old colt, he will have matched the feat accomplished by his half-brother in 2013.

Other 3yo Champions who got off to slow starts include:

By Bold Ruler, this 1972 foal was thrown to the proverbial wolves in his only start as a two year old in November of 1974, finishing second in the Grade I Laurel Futurity.

He would win in his third try as a three year old in July at Bowie Race Track in the non-graded Marylander Handicap before winning the Grade I Monmouth Invitational Handicap two weeks later.

Wajima won four consecutive graded stakes races in 1975.  Following his Monmouth win, Wajima took the Travers at Saratoga, as well as the Woodward Stakes and Jockey Club Gold Cup--two Grade I races at Belmont that year.

He was named the 1975 Champion three year old colt.

By the great Triple Crown winner Seattle Slew out of an unraced mare named Alluvial (by Buckpasser), Slew o’ Gold won his debut at age two against maiden special weight runners, then followed that up with a victory in allowance company next out.

Slew o’ Gold wasn’t able to capture any of his sire’s magic during the Triple Crown races, finishing fourth on the first Saturday in May, and finishing second in the Belmont Stakes after skipping the Preakness (he did, however, take the Grade II Peter Pan Stakes two weeks prior to the running of the Belmont).

After a poor sixth place finish in the 1983 Haskell, then placing in the Travers, Slew o’ Gold came into form--winning the Grade I Woodward in September, then the Grade I Jockey Club Gold Cup in October--earning the Eclipse Award as Champion three year old colt.

He would win another Eclipse award in 1984, being named Champion older horse by winning the Grade I Whitney, taking back-to-back editions of both the Woodward and Jockey Club Gold Cup stakes, as well as the Marlboro Cup Invitational Handicap before finishing second to Wild Again in the 1984 Breeders’ Cup Classic to finish his career.

Although he won the Grade I Wood Memorial as a sophomore, Slew o’ Gold saved his best racing for later, only finishing out of the exacta once in his last thirteen starts. He was enshrined in the racing Hall of Fame in 1992.

Another colt who would win the Breeders’ Cup Classic as a three year old, Tiznow would repeat the feat by winning consecutive B.C. Classics in 2000 and 2001.

By Cee’s Tizzy out of a Seattle Song mare, Tiznow won two Eclipse Awards in 2000--as Champion three year old colt and as Horse of the Year.

He followed that up by being named Champion older horse in 2001.

But, the 1997 foal didn’t race as a two year old, took three tries to break his maiden, and didn’t put together back-to-back graded stakes victories until October 15, 2000.

The last eleven starts of Tiznow’s career were all Grade I or II stakes events, and he won six of those, finishing second three times, while coming in third twice. He was retired in 2001 and was named to the Hall of Fame in 2009.

Although Arrogate’s rise in late 2016 isn’t unprecedented, a very strong 2017 campaign could place him amongst some all-time greats.