Arlington president defends plans to close and sell the track 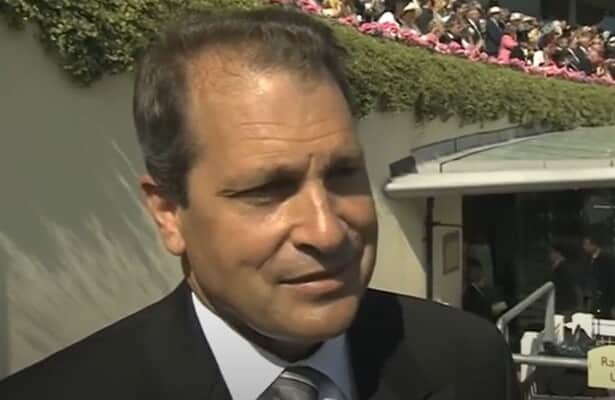 Tony Petrillo hears it every day. How it is a shame that Arlington Park, a bedrock of racing for 94 years, is being shut down seemingly forever and sold out from under loyal fans and horseplayers by his bosses at Churchill Downs Inc.

As he nears the end of his 11 years as president and general manager and 28 years overall at Arlington, Petrillo is keenly aware of the emotions that come with the track’s final closing day Saturday. He is also adamant that Churchill is not the bad guy in this drama.

“I guess I have a different perspective,” he said Thursday during a break in a downtown meeting of the Illinois Racing Board. “They have the largest number of racetracks of any racing company in the United States. There is a huge investment in racing.”

Impact of Arlington closing is seen in 2022 racing dates

Yet Arlington Park will no longer be a part of that investment. Petrillo and CDI did not ask for any racing dates in 2022, so for the first time since 1999, Arlington will not have any.

Seven months ago CDI confirmed it would sell the 326 acres of land on which the track has sat since it was opened five days after Babe Ruth led the New York Yankees to a signature sweep of the World Series and three days before the nascent Chicago Bears’ 1927 home opener at Wrigley Field.

Churchill also said it did not want the eventual buyer, perhaps the Bears, to have anything to do with racing. Conventional wisdom says CDI does not want more gaming competition for its Rivers Casino in nearby Des Plaines.

In an interview with HRN and the VSiN racing podcast, Petrillo insisted that the company is “not abandoning horse racing” in Illinois.

“There is the prospect of finding a new location and building out a facility with a much smaller footprint and better economics,” he said. “I hope that happens. I don’t know when and how that may happen, but that is the plan that’s been elaborated. To call them a bad guy, I don’t think you can find another racing company that has a larger investment in horse racing.”

That statement will fuel rage in horseplayers who would point to Hollywood Park and Calder having been closed on Churchill’s watch. (Petrillo said CDI leadership “did not play a role” in Hollywood’s demise and that Calder “had a certain number of issues.”)

“At Arlington you have this huge, huge investment in this huge, desirable property,” Petrillo said. “To have that big property not make best use of that money, that’s a fiduciary responsibility that is a heavy burden to carry. I really empathize with (Churchill CEO) Bill Carstanjen having to make that decision, but in the corporate world those decisions have to be made.”

Petrillo also repeated Churchill’s position that the cost to operate a racino, including a higher state-tax rate than a stand-alone casino, was not prudent. When expanded gambling was legalized in Illinois in 2019, CDI did not apply for a casino license on behalf of Arlington. That flew in the face of a two-decade push by the state’s racing interests, including Churchill, to legalize outside gaming and use some of that money to help the sport pay its bills. Critics have loudly called this two-faced – and other more florid terms.

“Oh, yes, absolutely. I hear it every day,” Petrillo said. “There are so many people that are attached to Arlington emotionally. What is missing in all this, because the gaming bill was passed so very quickly, is that we opposed it. We tried to get the other parts of the industry to come along and say, ‘Listen, this is not a good bill for racinos.’ I think that is missed and overlooked. But it happened.”

Because Petrillo is the Illinois face of Churchill Downs Inc., he has faced a lot of critical fire since that controversial decision was made. He did again Thursday, when he dutifully sat through the IRB hearing to set racing dates for 2022, even though he and Arlington had nothing to present.

Hawthorne Park was awarded 76 Thoroughbred dates and 75 for harness competition next year. That rival track’s management embraced the idea of a racino and has been trying to get one built, albeit with one delay after another. Now with that lifeline, it is the only racing game in town.

The fourth-generation president at Hawthorne, Tim Carey, told the IRB, “To put it bluntly, without Hawthorne, there is no more Illinois horse racing.”

(Actually, Fairmount Park in southern Illinois will also have Thoroughbred racing, getting 61 dates in 2022.)

Board member Alan Henry, as is his wont, was more direct after being part of the unanimous vote to approve the 2022 racing calendar, which has 36 percent fewer Thoroughbred dates for the Chicago area – and none next summer.

“The fault for this calendar belongs to Churchill Downs Inc.,” he said. “It has been the work of corporate single-mindedness. The argument can be made that the closing of Arlington Park will be a brutal, spear cut through the entire sport. Its demise would be yet another bloody stain on the hands of CDI.”

All the while, Petrillo quietly and stoically sat a few feet away.

Less than two weeks after Arlington is closed, the track’s emeritus president and forever patriarch Richard Duchossois turns 100. Duchossois hired Petrillo in 1993, seven years before he sold the track to CDI. The two of them still have frequent conversations.

“He completely understands the economics and the decisions that were made,” Petrillo said. “He’s very attached to (Arlington Park), but at the end of the day he’s a businessman, and he understands that decisions have to be made on good, solid, business common sense and not on emotion.”

Because his advanced age makes COVID a bigger risk for him, Duchossois will not be at the track this week, according to Petrillo. He will then not personally witness the closing act for the track that he bought in 1983, rebuilt after a fire in 1985, closed over a dispute with the state in 1998 and 1999 and reopened in 2000 only 40 days before he sold it to CDI.

Petrillo said sentiment notwithstanding, Duchossois is all-in on Churchill’s plans.

Like Arlington Park, Petrillo, 60, has been in the Chicago suburbs for a long time. He raised a family in Arlington Heights and has served the community in roles that range from the village’s zoning board to its youth soccer organization.

Although he toed the corporate line, Petrillo also allowed himself to reflect on the good, old days, when Arlington was such a gleaming reflection of Chicago racing. And when the legend was born of his boss picking up losing tickets off the squeaky clean grandstand floor.

“Personally, I would love to see Arlington stay,” he said. “It is ‘Mister D’s’ legacy and Arlington’s legacy that everyone who walks through that gate has an Arlington experience, and we do that the Arlington way. That’s really my focus right now.”

Soon enough, Saturday will become Sunday, and Arlington’s final days will be nothing more than a training center for a dwindling number of horses until that phase of the operation is shut down next Saturday.

While Petrillo could not say what lies ahead for him after Arlington closes, he did hint that he may have more details soon enough.

“Saturday I might answer that question a little differently.”

Asked then if the shackles would be off, Petrillo said, “Maybe Sunday.”

Breeders' Cup Juvenile Fillies 2021: Latest odds and preview
Based on the futures market for this year's $2 mil...

British Champion: Who is, is not coming to Breeders’ Cup?
Breeders’ Cup opportunities were mostly left on th...