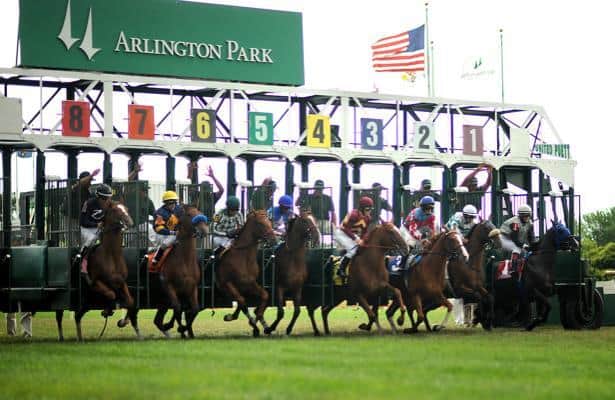 One of the bidders in the Arlington Park property’s impending sale, Roy Arnold of the Endeavor Hotel Group, expressed frustration at a recent decision by Churchill Downs Inc. to not apply for 2022 racing dates.

The move by CDI means that live racing is unlikely to occur next year at the historic track in the suburbs of Chicago.

“I’m disappointed that they would not have done that,” Arnold said. “It’s hard for me to understand why they wouldn’t put a placeholder in there because it would not have obligated them to race but it certainly would have preserved the value to a potential buyer.”

Arnold’s bid for the property, placed in June, included plans to renovate the racetrack surface, as well as the grandstands and infield. The area surrounding the track also would be developed, with the possibility of residential areas, shopping and a minor league hockey arena.

RELATED: End of the line: No 2022 race dates for Arlington Park

Arnold said a sportsbook license would be “immediately” applied for. He also mentioned trying to incorporate augmented and virtual reality features into the fan viewing experience at Arlington.

The plan was widely praised among Illinois horsemen, including Mike Campbell, president of the Illinois Thoroughbred Racing Association.

“Not only do we keep the track but we take that 326 acres and turn it into the most renowned residential, retail and entertainment district in the entire world,” Campbell said shortly after the bid was submitted.

“Some of our development partners have had informal discussions with members of the Bears organization,” Arnold said. “Basically said, this does not have to be a binary decision for either of us. We can work together and we would certainly like to do that.”

The Bears declined to comment when asked by Horse Racing Nation in June whether their plan would keep racing on the property.

Arnold, who previously served as Arlington Park president until 2010, questioned how CDI plans to keep its TwinSpires ADW platform operational in Illinois, which requires a company to have a track or contract with a track in order to operate an ADW.

“Unless they’ve got some double secret probation plan in place, TwinSpires would cease to operate (in Illinois),” Arnold said. “I’m sure the horsemen, the way they feel right now, would certainly challenge any attempt to license the platform in the state, so from that perspective alone it is confusing to me.”

Churchill Downs Inc. did not answer a request for comment about its decision to not apply for Arlington race dates.

Despite the setback, Arnold said he remains committed to his attempt to purchase the track, even if live racing cannot come back until 2023. He said the track would be able to host other events and would not simply remain vacant until racing could begin again, plus the time could be used for improvements to the property.

“We’ve made clear to (CDI) that that would not deter us from proceeding with our bid, and we've told the horsemen that,” Arnold said. “But we had always planned after closing, which we didn’t really foresee until the first quarter of 2022, that we would commence a major (capital expenditure) program.”

He also said he would hope to continue a business relationship with CDI if his bid is selected for the track.

“I would have thought they would have been in a stronger negotiating position had they allowed us to be the successor to a notional race dates application,” Arnold said. “We had no objection, there’s no reason for us to have an adversarial relationship with CDI, they have a platform, they have a tote company. … Why wouldn’t we sit down with them to talk about a deal to continue TwinSpires access to the market?”

CDI has given no indications of who it plans to sell the property to, but CEO Bill Carstanjen mentioned the property during a Thursday earnings call.

“We have received numerous bids from interested parties for the land and are working through the process to select the final winning bid,” Carstanjen said.

The current meet at Arlington is scheduled to run through Sept. 25.