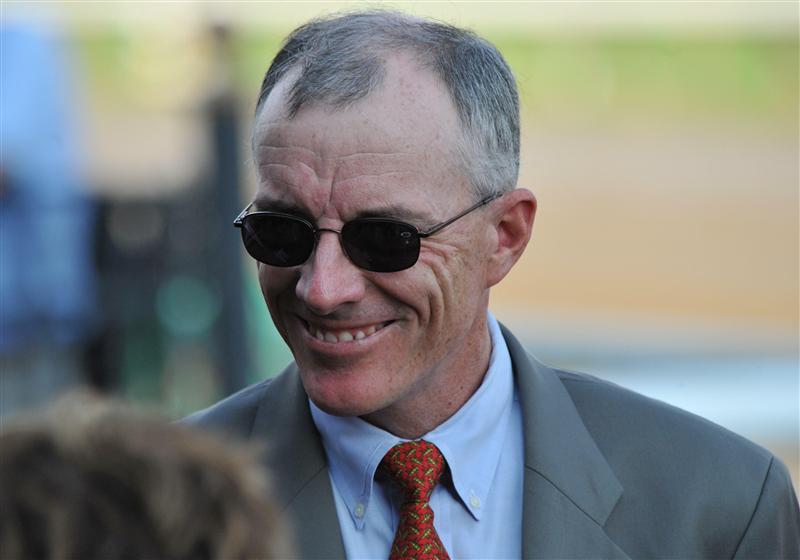 Kathy Harty and Mark DeDomenico’s Colonel Joan may have taken her time to break her maiden, but she sure did do it impressively at Arlington International Racecourse on Friday.  Always highly regarded by trainer Eoin Harty, the daughter of Travers winner Colonel John (also trained by Harty) was third in last year’s Grade I Breeders’ Cup Juvenile Fillies Turf behind European champion juvenile filly Chriselliam in her fourth career start.  Kept slightly wide during the running of Friday’s affair, she quickly assterted herself en route to a comfortable 1¾-length score.

“I tried my best to keep her out of trouble.  She was looking at everything - the camera crew, everything,” said winning rider James Graham.  “She was coming in extremely tough with the way she was working,” added assistant trainer Whit Beckman, who has been overseeing Harty’s local string.  “She did everything the right way coming into this.  She’s put some weight on since arriving and has looked great.”

Harty, who was on hand for the victory - his first at the meet after a series of seconds and thirds at low odds - was visibly pleased for the filly co-owned by his wife.  “She ran exactly like we thought she would.  I still have high hopes for her.  I was tired of taking peoples’ money,” he joked.  “I’m glad we could get a win for the bettors.”

As far as the future, a return to stakes competition is inevitable for the multiple stakes-placed filly.  “We’ll make a decision soon.  She’ll most likely stay at Arlington.  There’s the (Grade III Arlington) Oaks and the Hatoof (Stakes) to consider.”  The Oaks, over the Polytrack - a similar surface upon which Colonel Joan raced well upon last year at Del Mar - is slated for July 19, while the grassy Hatoof is part of the International Festival of Racing Aug. 16.