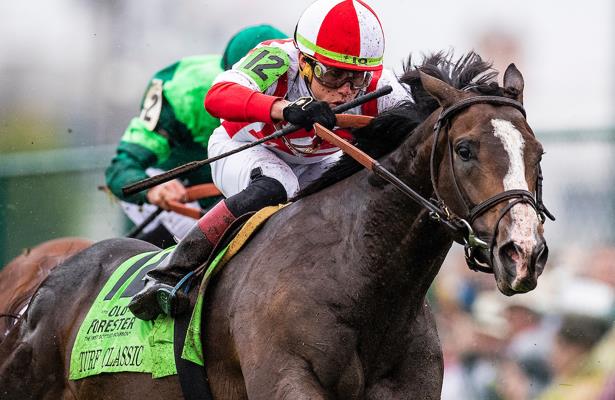 Arlington Park gets its turn in the national spotlight Aug. 10 when the 37th edition of the Arlington Million (G1) headlines a trio of Grade 1 turf races at the Chicago-area track. Defending champion Robert Bruce and division leader Bricks and Mortar are among 11 runners targeting the Million, according to Chris Polzin, Arlington's director of racing and racing secretary.

Pre-entries for the Million, $600,000 Beverly D. (G1) for fillies and mares and $500,000 Secretariat Stakes (G1) for 3-year-olds will be finalized Friday with post positions drawn Tuesday.

Convento Viejo LLC's Robert Bruce, who won last year's Million by a half-length as the 5-2 second choice, has failed to reach the winner's circle in four subsequent starts. In two outings this season for Chad Brown, the 5-year-old son of Fast Company checked in fifth in Belmont's Fort Marcy Stakes (G3) and was runner-up behind Bricks and Mortar in the June 8 Manhattan Stakes (G1).

Bricks and Mortar, also from the Brown barn, has surged to top of the Male Turf division with four wins in four starts this campaign. Prior to his Manhattan win, the 5-year-old son of Giant's Causeway claimed victory in the Pegasus World Cup Turf (G1), Turf Classic (G1) and Muniz Memorial (G2).

The Million could also feature a trio of European invaders. Trainer Aiden O'Brien is considering running the mare Magic Wand and Hunter Horn, both of whom exit off-the-board finishes in last Saturday's King George and Queen Elizabeth Stakes (G1) at Ascot. Trainer Fabrice Chappet is considering Intellogent, who was fourth in the Prix d'Ilspahan (G2) in his most recent start.

Sistercharlie, last year's champion Female Turf Horse, made her belated return to the races a winning one in the Diana Stakes (G1) at Saratoga on July 13. The daughter of Myboycharlie won four Grade 1s in 2018, including the Breeders' Cup Filly & Mare Turf, to earn championship honors for owner Peter Brant and trainer Chad Brown.

Sistercharlie is one of four possible from the Brown barn. Among those are Homerique and Thais, both of whom were well-beaten in the Diana by Sistercharlie. Competitionofideas is also under consideration.

Other intriguing contenders for the Beverly D. include European invader Fleeting for trainer Aiden O'Brien. A 3-year-old by Zoffany, Fleeting was third in the Epsom Oaks (G1) this spring and is exits a promising runner-up finish in the Irish Oaks (G1).

If Magic Wand doesn't take on the boys in the Million, she is expected to land in this spot.

Secretariat shaping up as a wide-open affair

The top three finishers from last month's American Derby (G3), the local prep for the Secretariat, are among 13 colts listed as possible for the one-mile contest. Faraway Kitten won his first graded stakes with a hard-fought victory at odds of 15-1 in the American. Trained by Michael Maker, the son of Kitten's Joy surged to the front at the eighth pole and held off The Last Zip and Crafty Daddy by a neck at the wire.

The one to beat, however, could be Bulletin, the 2018 Breeders' Cup Juvenile Turf Sprint winner who went under consideration for a trip to Royal Ascot until a setback slowed his training following a fourth -- the City Zip colt's only defeat in four starts -- in Churchill Downs' April 27 William Walker Stakes.

So as to not compete with the New York Racing Association's new "Turf Triple" series of races, the Secretariat backs up from 1 1/4 miles to a mile this year but retained its Grade 1 status.