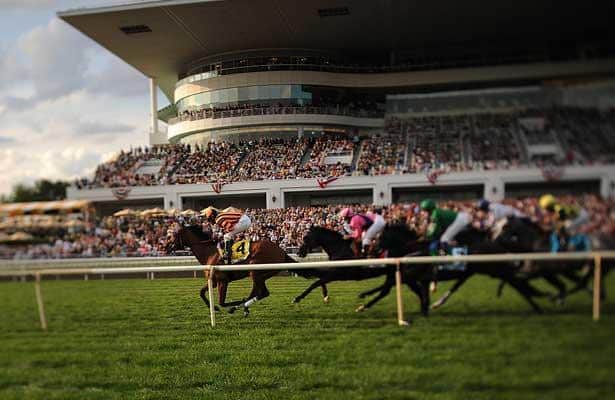 In this final Road to the Million, the goal will be to get as close as we can to establishing the likely fields for the 33rd running of the Grade I $1,000,000 Arlington Million and its supporting events. From this point until Saturday, Aug. 15, the Arlington International Racecourse notes will be almost exclusively International Festival of Racing Notes, with focuses on individual stories, news of additions and deletions and general happenings surrounding one of the premier racing festivals in the world.

Despite lacking a true standout on paper, Arlington Million XXXIII is lush with accomplished and competitive types from each side of the Atlantic Ocean. The connections of eight graded stakes winners based in America, including four Grade I winners, are readying their charges for the 10 grassy furlongs that await them. Chief among those is the Chad Brown-trained duo of Michael Dubb and partners’ SLUMBER and Kenneth and Sarah Ramsey’s BIG BLUE KITTEN. Two horses who have faced each other and swapped places in the exacta in two consecutive Grade I races – the Manhattan at Belmont and United Nations at Monmouth – the bay 7-year-olds must be mentioned as the top United States-based chances.

Grade I winners GABRIEL CHARLES and UP WITH THE BIRDS, who each have a lone win at the top level, must be respected. The former, owned by Sam Britt and Michael House and trained by Jeff Mullins, exits a knockout punch of a victory in the Grade I Eddie Read Stakes at Del Mar and is very much the ‘now horse’ if his form holds when shipping east. Up With the Birds, on the other hand, scored his lone Grade I in October 2013 and will look to improve upon his distant fourth in last year’s Million while under the care of Malcolm Pierce. The Sam-Son Farm homebred – now with Graham Motion – has been locked in on the Million since the commencement of the 2015 season. This will likely be his last year of racing and the Million is at the center of an American campaign aimed at creating a United States-based stallion prospect out of the son of top turf sire Stormy Atlantic.

Graded stakes winners LEGENDARY, QUIET FORCE, THE PIZZA MAN and TRIPLE THREAT bring solid form into the Million for their respective connections. Each also provides an intriguing storyline. Legendary will look to provide champion English jockey-turned-owner Walter Swinburn and young Maryland-based conditioner Niall Saville with their first wins (in their first attempts) in the Million.

Warner Thoroughbreds’ Quiet Force will stake his claim to be named claim of the year (though his bargain $40,000 acquisition actually occurred in 2014) when the Mike Maker trainee tries to duplicate the form that saw him win the local prep Grade III Arlington Handicap.

Midwest Thoroughbreds’ Illinois-bred The Pizza Man will attempt to bring the house down as the local fan favorite attempts to manifest the form that saw him dominate the 2014 American St. Leger on the same card for longtime Prairie State conditioner Roger Brueggemann.

Team Valor International and Gary Barber’s Bill Mott-trained Triple Threat will attempt to break through at the Grade I level and justify Team Valor principal Barry Irwin’s long-held belief that the Million was the jet-black son of Monsun’s ultimate race.

PUMPKIN RUMBLE has the look of an outsider, but is a hard-trying, smallish son of champion English Channel who is rounding into top form at the right time. Exiting his lone stakes victory against much lesser in the Mystic Lake Mile at Canterbury Park, the 4-year-old gelding draws enough similarities to shocking 2014 Million champ Hardest Core to garner a decided degree of deference.

A sextet of serious players from four different European countries has emerged, yet there are no Cape Blancos, Magicians or The Apaches in this year’s field. Mrs. Fitriani Hay’s THE CORSICAN and Godolphin Racing’s MAVERICK WAVE are likely to receive the most respect based less on form and more on for whom they run. The English-based duo are owned by connections with winning form at the Festival and trained by conditioners who have each won on the day, 2012 Beverly D. victor David Simcock and 2010 Million winner John Gosden.

All in all, there are 15 pursuing the Arlington Million, with two horses cross-nominated in the Grade III American St. Leger: The Pizza Man and Pumpkin Rumble.