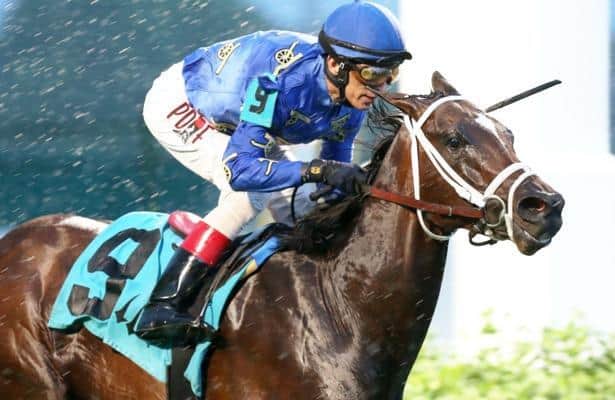 A new chapter begins Saturday for one of the most celebrated events on the summertime racing calendar.

Smooth Like Strait is the 5-2 morning line favorite for the Grade 1, $1 million Arlington Million. Post time from Churchill Downs is 6:25 p.m. EDT, with FS1 to air the 1 1/8-mile turf stakes for 3-and-up runners.

Arlington Park made history in 1981 when it put a $1 million purse on the line, the richest of any single race at that time. Future Hall of Famer John Henry won the inaugural running by a nose – three years before winning again in 1984 – and new tradition was born.

There were fits and starts along the way. The 1988 Arlington Million ran at Woodbine as construction took place at Arlington, and the event did not take place in 1998 and ’99 due to a track closure or in 2020 due to COVID’s effects on racing.

Arlington Park owner Churchill Downs announced in February 2021 that it would sell the property and the NFL’s Chicago Bears purchased it months later. The track conducted its final meet last year, with 27-1 shot Two Emmys winning a race that ran as the Mr. D. Stakes.

While Arlington Park itself is shuttered, Churchill Downs has resumed some of the former track’s stakes races more than 300 miles south of Chicagoland in Louisville, Ky. Highlighted among those are the Arlington Million, which will run at 1 1/8 miles rather than the traditional 1 1/4 miles.

The 2022 Arlington Million drew a field of nine, all of whom race for U.S.-based trainers. Favorite Smooth Like Strait ships east for trainer Michael McCarthy for his first start since running second in the Shoemaker Mile Stakes (G1) on May 30 at Santa Anita.

Smooth Like Strait shows a 21: 7-8-3 record with $1.58 million earned but has not won a race since the 2021 Shoemaker Mile. Jockey John Velazquez will ride the 5-year-old son of Midnight Lute.

Santin (3-1) already owns a Grade 1 win over the Churchill turf, having won the Turf Classic Stakes one race before the Kentucky Derby on May 7. Trained by Brendan Walsh, he looks to bounce back from a sixth-place effort June 11 at Belmont Park in the Manhattan Stakes (G1).

Here is a look at the field for the 2022 Arlington Million (trainer and jockey in parentheses) with morning-line odds:

TimeformUS’ pace projections show Smooth Like Strait going out to the early lead under Velazquez and setting a fast pace.

Eight-time Churchill Downs leading rider Tyler Gaffalione has never ridden in the Arlington Million but hopes his debut in the storied race aboard Godolphin’s Santin brings him to the winner’s circle.

Santin trainer Brendan Walsh joins the Ron Flatter Racing Pod to talk about his horses in Saturday’s runnings of the Arlington Million and Beverly D. Stakes (G1). Walsh said Santin “loved this track on Derby weekend” and “if he can reproduce that race, then it should make him very dangerous.”

This week on HorseCenter, hosts Brian Zipse and Matt Shifman look back at Life Is Good's win in the Whitney Stakes (G1) before handicapping the Arlington Million and Beverly D. Stakes.

Gulfport (4-5) looms over this field for trainer Steve Asmussen after romping in Churchill Downs’ Bashford Manor Stakes by 12 1/4 lengths July 4. Jockey Joel Rosario will get a leg up on the Uncle Mo colt, who is 2-for-2. Michelle Lovell trains Damon’s Mound (7-5), a debut winner July 2 at Churchill. Super Chow (8-1) also won his debut race July 2, his coming at Gulfstream Park for trainer Jorge Delgado.

Rougir (2-1), who was seventh in the 2021 Breeders’ Cup Filly & Mare Turf, is morning-line favorite in this “win and you’re in” qualifier for the race’s 2022 running. Chad Brown trains and Manny Franco rides the 4-year-old Territories filly, a French Group 1 heroine who was fourth July 16 at Saratoga in the Diana Stakes (G1). Aidan O’Brien trains Lily Pond (5-2), who makes her U.S. debut off a Kilboy Estate Stakes (G2) win July 17 at Curragh. Two-time Grade 2 winner Princess Grace (3-1) won the Dr. James Penny Memorial Stakes (G3) on July 12 at Parx for trainer Michael Stidham.

Regal Glory (6-5) battles the boys for Brown in this “win and you’re in” race toward the Breeders’ Cup Mile. Jockey Jose Ortiz gets the call on the 6-year-old Animal Kingdom mare, whose four straight triumphs include the Just a Game Stakes (G1) on June 11 at Belmont Park – one of three Grade 1 scores on her ledger. Brown also trains Masen (2-1), winner of Belmont’s Poker Stakes (G3) on June 18. Casa Creed (5-2) defended his title in Belmont’s Jaipur Stakes (G1) on June 11 for trainer Bill Mott and was third in the 2021 Fourstardave.

Going Global (6-5) carries the high weight of 125 pounds, five more than her closest rival, in search of her seventh graded win for trainer Phil D’Amato. Jockey Umberto Rispoli will be up on the 4-year-old Mehmas filly, a Grade 1 winner who was third May 30 at Santa Anita in the Gamely Stakes (G1). Leonard Powell trains Avenue de France (4-1), winner of Del Mar’s Osunitas Stakes on July 23. Park Avenue (4-1) tries to make the grade for trainer John Sadler after winning the Ouija Board Distaff Stakes on May 30 at Lone Star.

Procrastination (8-5) won on debut on Independence Day at Los Alamitos, powering away by eight lengths. Jockey Ricardo Gonzalez retains the mount on the Not This Time filly for trainer Michael McCarthy. Doug O’Neill trains Absolutely Zero (9-5), whose 2-for-2 ledger includes a Fasig-Tipton Futurity win June 18 at Santa Anita. Dazzlingdominika (4-1) won on second asking May 13 at Churchill for former trainer William Walden and makes her first start Saturday for D’Amato.