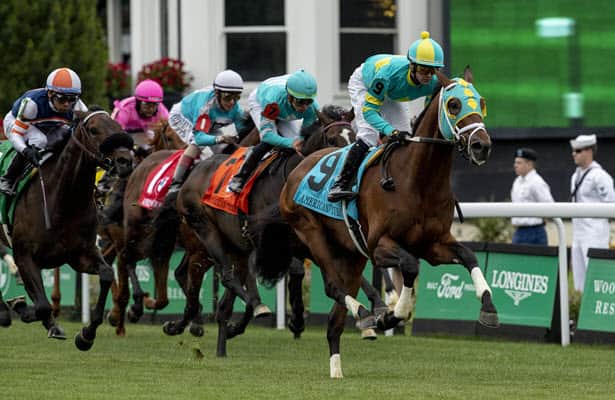 Grade 1 winners Santin in post 6 and Smooth Like Strait in 4 headlined the draw for Saturday’s wide-open renewal of the Grade 1, $1 million Arlington Million, which has been moved from shuttered Arlington Park to the troubled turf course at Churchill Downs.

Nine horses were drawn into the race that has been cut to 1 1/8 miles. The traditional 1 1/4-mile distance would not fit at Churchill Downs without starting in the middle of a turn.

Saturday’s card also includes the Beverly D. (G1), a $500,000 race for fillies and mares who will be asked to go 1 1/8 miles on a separate strip of the Churchill turf.

Santin, a Godolphin homebred who is trained by Brendan Walsh, won the Turf Classic (G1) on Kentucky Derby day over the same course and distance as the Million. The 4-year-old colt by Distorted Humor then finished a troubled sixth June 11 in the Manhattan (G1) at Belmont Park after rider Tyler Gaffalione lost his crop in the deep stretch. Gaffalione will have the mount again this weekend.

Smooth Like Strait, who is trained by California-based Michael McCarthy, has had five second-place finishes and one third since his last victory more than 14 months ago in the Shoemaker Mile (G1) at Santa Anita. Trying to defend that victory as a 2-5 favorite May 30, the 5-year-old Midnight Lute horse finished second in his most recent start. John Velázquez will be Smooth Like Strait’s third different rider in as many races.

Chad Brown, who trained four Million winners during the ’10s, tries to add to that record with Sacred Life. The 7-year-old Siyouni ridgling who got post 2 and jockey Manny Franco ended a four-race losing streak June 18 when he won the 1 1/8-mile Monmouth Stakes (G3) in New Jersey. Sacred Life has not finished better than third in his four previous Grade 1 starts.

Set Piece, a Juddmonte-owned gelding who drew the rail, finished fifth of 11 on July 15 in the Forbidden Apple (G3) at Saratoga. Trained by Brad Cox, the 6-year-old by Dansili won two starts ago as the 2-1 favorite in the Dinner Party (G2) at Pimlico.

Admission Office, a 7-year-old Point of Entry gelding trained by Brian Lynch, won the Arlington Stakes (G3) on June 4 at Churchill before a last-place finish July 8 in the Grand Couturier at Belmont Park. He drew post 7.

Field Pass, who drew post 3 for trainer Mike Maker, came in third in the Arlington Stakes, losing by only a neck. After crossing second July 16 in the Texas Turf Classic at Lone Star Park, the 5-year-old Lemon Drop Kid horse was promoted to the winner’s circle after stewards decided first-place finisher Megacity interfered with him in the stretch.

Starting from post 5, Megacity gets a chance for revenge in his second start since Michael Dubb claimed him May 21 for $80,000. The 7-year-old City Zip gelding’s six victories have included five allowances and one maiden. This will be Megacity’s first time in a Grade 1 race.

Drawn to the outside post, Cellist is a two-time stakes winner who will cut back to Saturday’s nine-furlong distance for trainer Rusty Arnold. Bred and owned by Brad Kelley’s Calumet Farm, the 4-year-old Big Blue Kitten gelding has been on a nearly 2 1/2-month break since his narrow victory at 5-1 odds in the Louisville (G3), a 1 1/2-mile test May 21 on the Churchill turf.

Cavalry Charge, who got post 8, has not won in four starts since his 35-1 upset Feb. 19 in the Fair Grounds Stakes (G3). Among the vanquished rivals that day was 5-2 favorite Santin, who ended up fourth. Trained by Dallas Stewart, the 5-year-old Honor Code gelding finished second last out in the Jonathan B. Schuster Memorial on July 9 at Horseshoe Indianapolis.

The Arlington Million will be the last of 11 races on the Saturday card. It is scheduled to start at 6:25 p.m. EDT.

Family Way, a close second two months ago for Walsh in the New York (G1), drew post 2 and will have Gaffalione riding her in the field of five for this 1 1/8-mile, “win and you’re in” qualifier for the Breeders’ Cup Filly & Mare Turf.

Rougir, who finished out of the money in two Grade 1 starts since winning the Beaugay (G3) on May 14 at Belmont Park, will start with Franco from post 4 and represent Brown, who has won this race a record six times.

Lily Pond, the lone international shipper, drew the outside and comes in off a Group 2 victory in Ireland for trainer Aidan O’Brien. Princess Grace, a Grade 3 victor this month at Parx, drew post 3 for trainer Mike Stidham. Dalika, who got the rail, is 0-for-5 since a Grade 3 victory for Al Stall Jr. on soft turf last summer at Delaware Park.

The Arlington Million and Beverly D. are the only two races scheduled for the Churchill turf on Saturday. The grass was replanted and widened in a $10 million renovation last summer. It has been slow to take root, so it has not been strong enough to absorb the wear and tear of horses running on it.

After 3-year-old colt Gingrich died from a catastrophic injury he suffered on the new grass, there were no turf races the last three weeks of Churchill’s spring-summer meet that ended July 4.

Saturday’s races fill a one-day meet that was reserved for the Arlington Million card. Since it was created as the world’s first race with a seven-digit purse, the Million was held for all but four years at Arlington Park in suburban Chicago between 1982 and Churchill Downs Inc.’s closing of the course last fall.

The National Weather Service said it expected the weather to be sunny with a high near 81 degrees for Churchill Downs on Saturday.