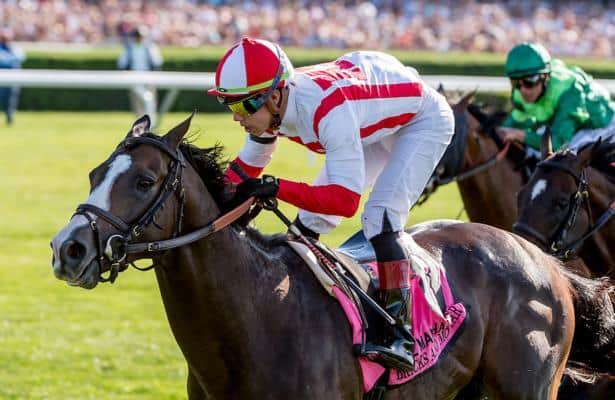 Even with Bricks and Mortar’s presence, the Grade 1 Arlington Million still drew a healthy field size of 10 this year, with four European-based entries. While the competition looks overmatched on paper compared to the near-invincible form of Bricks and Mortar, in racing anything could still happen.

One other horse attracting attention is Robert Bruce, who won this race last year. Plus, familiar European-based runners Magic Wand and Hunting Horn ship over here again for trainer Aidan O’Brien, and Bandua carries the hopes of the local horses.

1. Robert Bruce, 7-2 (Fast Company – Chad Brown/Javier Castellano – 13: 8-2-0): The expected second choice gets to save all the ground with the rail post. Toss out his Fort Marcy Stakes (G3) flop, as he needed the race. The runner-up finish in the Manhattan Stakes (G1) is a better barometer of his ability. With that said, Bricks and Mortar still finished 1 ½ lengths ahead, which is a sizable margin on turf. But there is still the chance he improves in his third start off the layoff. Win contender.

2. Magic Wand, 5-1 (Galileo – Aidan O’Brien/Wayne Lordan) – 16: 2-5-2): This filly has disappointed since winning at Royal Ascot last summer. In her most recent start, she finished a dismal 11th in the King George VI and Queen Elizabeth Stakes (G1). Her second in the Pegasus World Cup Turf to Bricks and Mortar earlier this year is credible, but she keeps losing. After the Pegasus, she ran fifth in the Dubai Sheema (G1) and third in the Man o’ War Stakes (G1), before runner-up finishes in the Wolferton Stakes and Pretty Polly (G1) in Europe. Use underneath.

3. Bricks and Mortar, 8-5 (Giants Causeway – Chad Brown/Irad Ortiz Jr. – 11: 9-0-2): How do bettors play against this horse? Since returning in December, he is undefeated with wins in the Pegasus World Cup Turf, Muniz Memorial Handicap (G2), Turf Classic Stakes (G1) and the Manhattan Stakes (G1). In most of those races, he looked clearly the best from a visual standpoint, and the small margin in the Muniz Memorial is forgivable because of the slow pace. The pick.

4. Catcho En Die, 30-1 (Catcher in the Rye – Naipaul Chatterpaul/Sophie Doyle – 13: 5-1-1): With a ninth-place finish in the Manhattan, followed by an eighth in the United Nations Stakes (G1) against a weak field and an 11th in the Bowling Green Stakes (G2), it is hard to imagine why the connections want to run. Toss.

5. Hunting Horn, 12-1 (Camelot – Aidan O’Brien/Ryan Moore – 19: 2-2-5): In Europe, this is a constant also-ran for O’Brien. Sometimes he will pick up a minor check, as he did when running fourth in the Prince of Wales’s Stakes (G1) behind Crystal Ocean and Magical at Royal Ascot. On this soil in 2019, he ran fourth in the Man o’ War Stakes (G1) after setting a fast pace and third in the W.L. McKnight Stakes (G3). If he fires, a minor award is the limit. Use underneath.

6. The Great Day, 12-1 (Harlan's Holiday – Arnaud Delacour/Trevor McCarthy – 13: 4-6-1): This one finished a decent second in the Arlington Handicap (G3), 1 ¾ lengths behind Bandua. But if that effort is his best, he cannot contend in the Arlington Million with Bandua entered again and better horses present as well. Toss.

7. Pivoine, 15-1 (Redoute’s Choice – Andrew Balding/Silvestre De Sousa – 19: 6-0-1): Some bettors might find a new European invader intriguing, but his overall class is lower than Magic Wand or Hunting Horn. Even though he won the Diamond Jubilee Cup in his most recent start, no real competition ran against him. Pivoine also tried the Gordon Richards Stakes (G3) and Al Rayyan Stakes (G3) earlier this year and finished sixth and fourth in those two races respectively. Toss.

8. Captivating Moon, 20-1 (Malibu Moon – Chris Block/Jose Valdivia Jr. – 14: 2-6-4): His third-place effort in the Arlington Handicap, 3 ¾ lengths behind Bandua, will not cut it against this group. In his only other start at the Grade 1 level, he ran fifth in the Secretariat Stakes (G1) on this card last year. Toss.

9. Intellogent, 12-1 (Intello – Fabrice Chappet/Florent Geroux – 11: 3-1-2): The other new European face finished fourth in the Prix d’Ispahan (G1). Although the race is labeled as a Group 1, it is not a “true” Group 1 as the winner Zabeel Prince went on to finish seventh in the Prince of Wales’s, eighth in the Coral-Eclipse (G1) and seventh in the Sussex Stakes (G1). Earlier this year, Intellogent also finished last in the Prix Ganay Stakes (G1), 13 ¼ lengths behind Waldgeist. Toss.

10. Bandua, 6-1 (The Factor – Jack Sisterson/Adam Beschizza – 12: 3-1-1): Bandua did look sharp winning the Arlington Handicap, but who did he beat? None of the big names from the Manhattan were present, making the race a bit of a cakewalk. With that said, Bandua’s sixth in the Manhattan is better than it looks as he chased a fast pace. He is still young and improving. Live longshot.

Bricks and Mortar does not look beatable unless he regresses. But he will go off at even money or lower, making him a difficult betting option.

This is not the most popular stance to take, but the Arlington Million is a classic “skip race” vertically. No rule exists that bettors need to attack every big race out there, and this one is unappealing from almost every angle. Find another race.

If playing horizontals, Robert Bruce and Bandua are usable as B or C options.