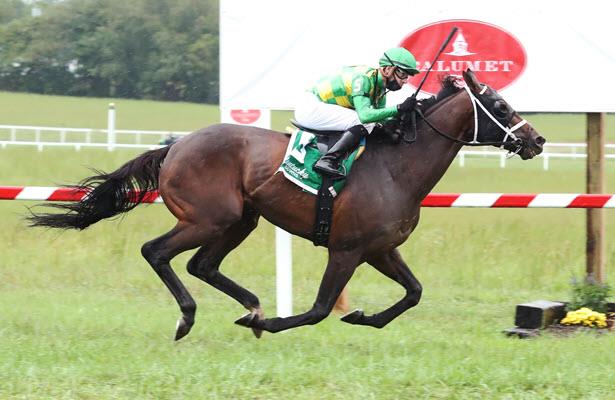 Owner Jerry Crawford of Donegal Racing said he was pleasantly surprised with the upset effort posted by Ballagh Rocks in the Lure on closing day at Saratoga Race Course.

"The addition of blinkers really made all the difference and I give Brad credit for that," Crawford said. "Coming into the race, I thought Zulu Alpha was the best distance turf horse in North America but given the result we belong in the same conversations."

Crawford said Arklow could train up to the Grade 1 Breeders' Cup Turf on November 7 at Keeneland.

"For the last three days we've been talking about that," Crawford said. "We haven't made a final decision. If we had to decide today, he might train up to the Breeders' Cup."

Owned by Donegal Racing in partnership with Peter Coneway and Joseph Bulger, Arklow has won four graded stakes in a 29-race career while amassing lifetime earnings of $2,466,116.

Ballagh Rocks, a son of Stormy Atlantic trained by Hall of Fame Bill Mott, tracked the pace in second in the Sept. 7 Lure and drew off in the stretch to a 2 ¼ length victory under Junior Alvarado, collecting his seventh victory in 24 lifetime starts.

The veteran 7-year-old won the Grade 3 Poker over the Widener turf at Belmont in June 2017 and raced for a $62,500 tag in his two starts prior to the Lure, both of which were runner-up placings against optional claiming company.

"I think he surprised both Bill and myself," Crawford said. "We actually gave some thought of scratching because the race was pretty tough. He got a perfect trip, a great ride and when he stalked the horse in front of him and took off, the others weren't able to close much ground."

Crawford said he was unsure as to where Ballagh Rocks would make his next start.

"Bill and I started that conversation [Wednesday] and we aren't sure yet," Crawford said.

Owned by Donegal Racing and Madaket Stable, Ballagh Rocks is out of the Sadler's Wells mare Bells Are Ringing - a half-sister to the late prolific stallion Unbridled's Song.

Crawford said he takes pride in owning two seasoned veterans like Arklow and Ballagh Rocks that are still competing at a high level.

"I love it. I think it's great for racing. It's a little easier to do with turf runners than dirt runners,' said Crawford. "It's great for the sport and good for fans to get to know horses and watching them continue to run well."

Crawford also spoke of Shamrocket, who was recently third in the Dueling Grounds Derby at Kentucky Downs for trainer Christophe Clement. The consistent son of Tonalist, who broke his maiden at Belmont Park going a mile and a quarter on the turf, could target the Grade 1, $300,000 Hollywood Derby on November 29 at Del Mar.

"He had a little bit of a slight bone bruise on his left front, so we've given him a few days," Crawford said. "He's all clear from the vets to return to racing. It might be tough to find the right race for him, but the Hollywood Derby is a possibility."