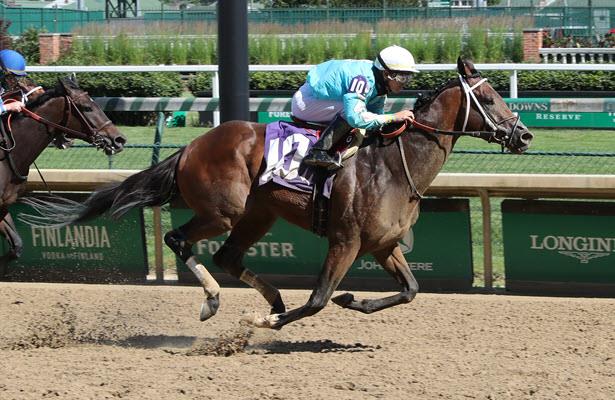 JRita Young Thoroughbreds’ four-time winner Man in the Can will take his next step on the road to the Kentucky Derby in the $600,000 Blue Grass (G2) on July 11 at Keeneland following his 1 ½-length allowance victory Friday at Churchill Downs.

“That sure was an impressive turn of foot,” trainer Ron Moquett said. “I wasn’t expecting him to go off as that big of a favorite but he ran against some stiff Arky-bred competition in his last couple of starts at Oaklawn. I think the bettors saw that before the race and that’s why he ended up going off favorite.

"He definitely deserves a shot in the Blue Grass," Moquett continued. "There have been so many top Kentucky Derby contenders that have gone off the trail this week that it’s really anyone’s game.”

The rescheduled Blue Grass will award the Top 4 finishers 100-40-20-10 points on the Road to the Kentucky Derby. Should Man in the Can qualify for the Sept. 5 Kentucky Derby, he would become the first Arkansas-bred to run in the race since Barbizon Streak, who finished 16th in 1971.

Also bred by JRita Young Thoroughbreds, Man in the Can was a debut winner at Remington Park on Dec. 4 and has won four of five starts in all, including Friday's second-level allowance in a 12-horse field. He is by the Into Mischief stallion Can the Man out of Smeauxkinnthelane, by Smoke Glacken.

Others 3-year-olds known to be eyeing the Blue Grass are Basin, Enforceable, Shivaree and Gouvernour Morris.