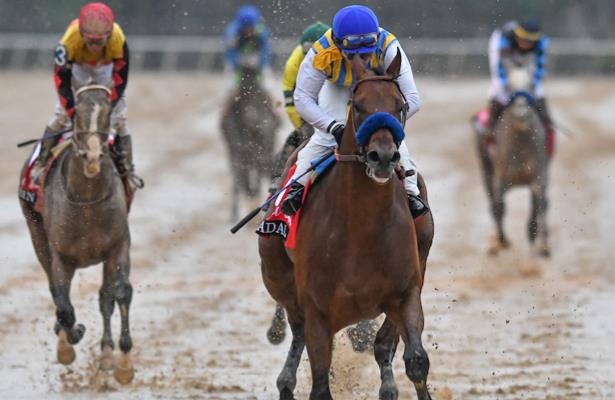 In a list published over the weekend by Oaklawn Park, 99 horses were nominated for the May 2 Arkansas Derby (G1), a race that should attract well beyond a full field of 14 when entries are taken.

But will that be enough to convince track officials to card split divisions of the only 2020 Kentucky Derby prep currently on the calendar?

According to Bob Ehalt, reporting for BloodHorse, Oaklawn racing secretary Pat Pope said multiple Arkansas Derbys will be considered in the event that at least 20 horses are committed to running, with a decision coming as soon as Sunday.

The prospective field is led by Rebel Stakes (G2) winner Nadal, Tampa Bay Derby (G2) winner King Guillermo and Southwest Stakes (G3) winner Silver Prospector. Then there’s the likes of Charlatan, an unbeaten Bob Baffert colt who’s 2-for-2 with triple-digit Beyer Speed Figures but may need a split to run given he has competed only in maiden and allowance company.

“He breezed really well,” Cox said. “I never know if I’m really running them until I lead them to the paddock. … I want to do what’s best for my horse.”

Oaklawn’s stakes coordinator, Matt Crawford, listed the contenders in order of earnings that will determine priority, with champion 2-year-old Storm the Court topping the list. A number of colts not expected to show up — Ee Indien, Enforceable and Maxfield, to name a few — are also prominent on the list, making for a tough task to determine a top 14 at the moment.

Farther down on the list are Farmington Road and Taishan, the second- and third-place finishers of the April 11 Oaklawn Stakes guaranteed a spot.

True to their word, the connections of Florida Derby (G1) hero Tiz the Law did not nominate to the Arkansas Derby off that March 28 victory at Gulfstream Park. He figures to await summer racing in New York.

Meanwhile, connections to a number of seemingly live contenders such as recent local winners Blackberry Wine, Shooters Shoot and Pneumatic may have to play a waiting game to see which higher-earning colts will take a pass.

Oaklawn Park reduced the Arkansas Derby’s purse from $1 million to $750,000 once its casino closed and racing started being conducted behind closed doors in Hot Springs, Ark.

If going by the precedents, Kentucky Derby points will be awarded in the event of split divisions based upon how much of the original purse is offered for both races. Should Oaklawn host two $750,000 races, for instance, the payouts would measure 100-40-20-10 for both flights. Should the purse halve to $375,000 apiece, the Arkansas Derby could become a 50-20-10-5 qualifier.

At this now early stage on the way to the Sept. 5 Kentucky Derby, ensuring some of the nation’s best 3-year-olds have a place to run in the coming weeks via a split could win out over running one stronger Arkansas Derby that serves up maximum points.