Arkansas Derby odds and analysis: A case for Hozier 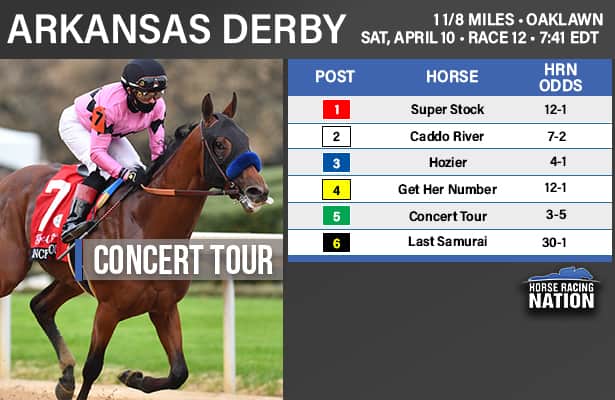 Concert Tour enters the Grade 1, $1 million Arkansas Derby at Oaklawn Park on Saturday as a deserving favorite. At the same time, he is not a monster on final times or speed figures, although the monster figure might come this weekend.

As explained below, there is room for a minor upset. It all depends on whether the pace heats up enough to set up a horse that can close well.

1. Super Stock, 12-1 (Dialed In – Steven Asmussen/Ricardo Santana Jr. – 7: 1-2-2 – $204,762): Off a 139-day layoff, Super Stock came back with a mild fourth-place finish in the Rebel Stakes (G2) last month. Super Stock still lost by 6 1/2 lengths to Concert Tour, but he did show interest in the stretch. His lack of ability to close the deal is a concern, as he owns only one win in seven starts. In fairness, two of his losses include a third in the Iroquois Stakes (G3) and another third in the Breeders’ Futurity Stakes (G1). In the latter trail race, he was 4 3/4 lengths behind Essential Quality, one of the favorites for the Kentucky Derby in a few weeks. With that said, seven races is a long time to go without a second win. If the pace heats up better in this race compared with the Rebel, Super Stock might hit the trifecta. Use underneath.

2. Caddo River, 7-2 (Hard Spun – Brad Cox/Florent Geroux – 5: 2-2-0 – $196,092): Caddo River broke his maiden last November at Churchill Downs by 9 1/2 lengths. Two months later, he took the local Smarty Jones Stakes in his Derby trail debut by 10 1/4 lengths. In both instances, Caddo River set the pace en route to victory. But in the Rebel Stakes on this course, Caddo River made his first real blunder with a fading fifth-place finish. There is an explanation, though. The Baffert-trained Concert Tour went straight to the front in the Rebel and gave jockey Florent Geroux on Caddo River two bad options heading into the first turn. Either Geroux and Caddo River could duel with Concert Tour, or he could hold a rank Caddo River back, switch out and attempt to sit off Concert Tour for the first half of the race. Geroux chose the latter strategy and it did not work out. But letting Caddo River loose is probably not going to work either unless Concert Tour stumbles early. Caddo River has talent and might develop into one of the top horses, but it is hard to trust him unless an uncontested lead looks like the obvious scenario on paper. Use underneath.

3. Hozier, 4-1 (Pioneerof the Nile – Bob Baffert/Martin Garcia – 3: 1-1-0 – $240,260): First of all, cross out Hozier’s career debut on Jan. 15 at Santa Anita. After showing early speed, he gave way to fourth and 14 lengths behind Concert Tour. But this horse probably is not built for sprinting. In Hozier’s second start in February, he made a step forward and broke his maiden by 1 3/4 lengths with a 102 TimeformUS Speed Figure. Baffert thought highly enough of Hozier to give him a chance in the Rebel, and he made another step forward with a good run to finish second and 4 1/4 lengths behind his stablemate Concert Tour. The flow of the race did not favor Hozier, as Concert Tour took control of the lead through moderate fractions after Geroux kept Caddo River from a direct duel. Hozier also took a step forward in his runner-up effort by earning a 108 on TimeformUS, making all three of his TimeformUS figures rise in succession. In this race, the longer nine-furlong distance might help Hozier, as could the projected battle between Caddo River and Concert Tour. Considering the Rebel results, it does not make sense for Geroux to play conservative on Caddo River again. Concert Tour is undefeated, but he is not a monster on speed figures with a high of 116. Also note Hozier’s four-furlong bullet in 46.6 seconds on April 3. The situation is right to play Hozier and hope for one more step forward on the speed figure scale and a fast pace to set him up. As long as he starts as third choice or higher, the value is right. The pick.

4. Get Her Number, 20-1 (Dialed In – Peter Miller/Francisco Arrieta – 4: 2-0-0 – $225,667): The second Dialed In colt in this race brings successful graded stakes experience as the winner of the American Pharoah Stakes (G1) last fall. But his return in the Rebel Stakes left questions, as he ran a non-threatening seventh after traveling in mid-pack for most of the race. Most horses improve in their second start off the bench. Perhaps the connections need to slow down and work their way back up to a Grade 1 gradually. Even if he shows more early speed this time, Caddo River and Concert Tour will make it difficult. It is not easy to toss a Grade 1 winner, but this one needs to move forward in his return. Toss.

5. Concert Tour, 3-5 (Street Sense – Bob Baffert/Joel Rosario – 3: 3-0-0 – $756,600): The undefeated Street Sense colt took control of the Rebel Stakes early and discouraged Florent Geroux on Caddo River from securing the lead. Because of those aggressive tactics under Joel Rosario, Concert Tour led from start to finish. He put away Caddo River on the far turn and began to open up in the stretch, eventually finishing the race 4 1/4 lengths in front of his stablemate Hozier. This time, Caddo River is more likely to let loose in his last chance at the Kentucky Derby. Concert Tour must either duel with Caddo River or press him closely. The situation might soften up both runners and set up Hozier or another runner. There also is a chance Concert Tour endures a fast pace and dominates anyway. At the end of the Rebel, he won easily with only a 116 on TimeformUS. His ceiling is possibly higher, but it is not a great idea to assume a horse who won under a hand ride is capable of running faster without past evidence. Regardless, Concert Tour is a must-use in multi-race wagers in case he performs to expectations. Win contender.

6. Last Samurai, 30-1 (Malibu Moon – Dallas Stewart/Jon Court – 4: 1-0-0 – $67,644): Off his fifth-place finish in the Southwest Stakes (G3), it is hard to recommend Last Samurai. Not only did 2-year-old champion Essential Quality, Spielberg and Jackie’s Warrior finish in front of him, but the allowance-level Woodhouse was two lengths ahead in fourth. Last Samurai lost by 13 1/4 lengths. In fairness, he now makes his second start off the layoff. Last year, Last Samurai lost two out of three starts. His lone win came by 3/4 of a length at Churchill Downs in a weak maiden race. On the positive side, a fast track might help him move forward, and trainer Dallas Stewart knows how to reach the Kentucky Derby with long shots. If Stewart thinks there is talent in Last Samurai, that is something to consider. Despite those points, Last Samurai is difficult to trust for even a minor share. Toss.

Conclusion: In terms of a win or place bet, Hozier is the best choice. If Hozier hits the exacta and Concert Tour misses the top two, the place payoff will return more than expected. Pick 4 players need to use Concert Tour alongside Hozier.