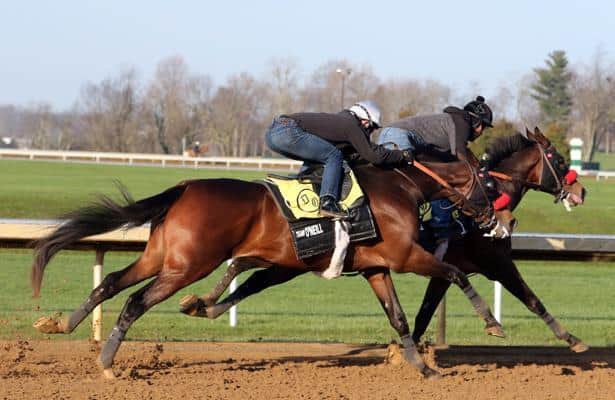 Wednesday morning, the two colts galloped on the main track with exercise rider Jonny Garcia aboard. Garcia also was Nyquist’s exercise rider during his Keeneland stay two years ago.

“They both galloped an easy mile and a half,” assistant Jack Sisterson said. “That would be their regular training regimen besides working or jogging. With Nyquist having been here, we sort of did just exactly what he did and copied that method. That seemed to work out pretty well, so we’re not going to change anything there. They’ll do exactly the same (on the track) going into the race, and walk Saturday morning.”

“If we can try and visualize the race before the race, we’re pretty sure Arawak is going to be forwardly placed, and Blended Citizen is going to be coming from off (the pace),” Sisterson said.

Sisterson was at Keeneland last spring occasionally with another O’Neill horse, Irap, who became the first maiden to win the Toyota Blue Grass. Irap went on to win the Ohio Derby (G3) and Indiana Derby (G3) and finish second in the Pennsylvania Derby (G1).

“To compare them to Irap, Irap was such a big-hearted horse and tried every time,” Sisterson said. “It was hard to take away the heart that that horse had. Both of these horses show like they’ve got some heart, but Irap was such a unique horse when it came to that. It’s hard to replace that.”