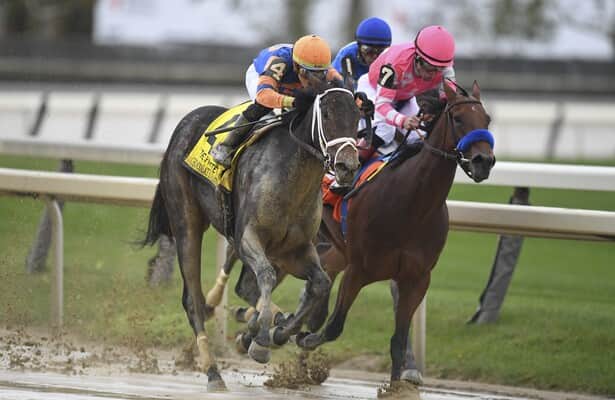 Repole Stable’s Chocolate Gelato backed up a highly impressive maiden victory, utilizing a ground-saving trip under jockey Irad Ortiz Jr. to capture a breakthrough win in Sunday’s Grade 1, $400,000 Frizette for 2-year-old fillies at the Belmont at the Big A fall meet.

Chocolate Gelato came into the Frizette off an 8 1/2-length maiden victory at second asking going six furlongs on Aug. 14 at Saratoga, where she defeated next-out winner Take Charge Briana. The dark bay daughter of second crop sire Practical Joke proved capable of stretching out to a one-turn mile in the 75th running of the Frizette, which was a Breeders’ Cup “win and you’re in” qualifier for the Breeders’ Cup Juvenile Fillies on Nov. 4 at Keeneland. Eight fillies have captured the Frizette-Breeders’ Cup Juvenile Fillies double, including last year’s winner Echo Zulu.

Congrats to the connections of 2x #FasigGrad CHOCOLATE GELATO, winner of the Frizette S. (G1)!

Chocolate Gelato broke inwardly from post 3 but was immediately corrected by Ortiz and secured a close, fifth position down the backstretch as impressive New York-bred maiden winner You’re My Girl established frontrunning tactics through an opening quarter-mile in 23.14 seconds and a half-mile in 46.90 seconds over the sloppy and sealed main track. Stakes-winner Vedareo was two paths to her outside in second with Spinaway (G1) winner Leave No Trace sitting in between horses in third.

Around the far turn, Chocolate Gelato split foes and found herself on even terms with You’re My Girl nearing the quarter pole as the two recorded three quarters of a mile in 1:12.66.

Chocolate Gelato gained a narrow advantage around the three-sixteenths pole, but You’re My Girl put up a stubborn run to the inside and fought her rival in deep stretch. However, there was no sugarcoating Chocolate Gelato, who kept You’re My Girl at bay and secured a one-length conquest at a final time of 1:38.57.

You’re My Girl finished another 2 3/4 lengths ahead of Leave No Trace, followed by American Rockette, Vedareo and The Great Maybe completing the order of finish in that order. Raging Sea was scratched.

Chocolate Gelato provided Hall of Fame conditioner Todd Pletcher with his fourth Frizette win after saddling Adieu in 2005, Devil May Care in 2009 and Dreaming of Julia in 2012 to victories. She returned $5.30 for a $2 win wager as the 8-5 post time favorite.

Pletcher said the effort gave him confidence his filly is capable of the two-turn journey that lies ahead of her in the Breeders’ Cup Juvenile Fillies and praised runner-up You’re My Girl for a valiant effort.

“She settled through and handled the mile really well. I liked the way she turned off, and it gives you the impression two turns is going to be within her range,” Pletcher said. “I think she got there a little bit early and was waiting a bit. (You’re My Girl) didn't give up; that's a nice filly. She fought back, so I was proud of our filly for staying on to the wire. That was a nice field she beat.”

Ortiz, who captured his first Frizette win, said Chocolate Gelato’s move around the far turn was done with no asking.

“She was there for me, and at the three-eighths pole, she hit the clear and was moving forward on her own,” Ortiz said. “She got to the horse on the lead and was thinking a little bit. It's only her third start. She's still learning, and I had to work a little more aggressive on her, but she kept responding and got the job done.

Prior to her maiden victory, Chocolate Gelato was third on debut going 5 1/2 furlongs on July 14 at Saratoga en route to her second-out win one month later. Pletcher noted how the dynamics of the racetrack at Saratoga had changed considerably from the beginning of the meet.

“Mike (Repole) and I talked about it after the race. After the first week at Saratoga, that first group of babies that we ran. I don't think we were expecting the track to be as demanding as it was,” Pletcher said. “I don't think a lot of our 2-year-olds were as fit as we thought they were. She's a perfect example of one who improved a lot in her second start.”

John Terranova, trainer of runner-up You’re My Girl, applauded his filly for a “game effort” and did not rule out pursuing a start in the Breeders’ Cup Juvenile Fillies. The Gatsas Stables, R.A. Hill Stable and Hidden Brook Farm-owned Overanalyze filly was a 14 1/2-length winner on debut against fellow Empire Sate breds on Sept. 2 at Saratoga.

“It was the second start of her life. It was a big run coming back in her second start. A very nice filly won,” Terranova said. “We'll talk to the boys and see what everyone wants to do and see how she is more importantly and figure it out.”

You’re My Girl also impressed her jockey Joel Rosario, who praised the filly for her determination in her first start at one mile.

“She hung in there really well,” Rosario said. “She ran a big race. It looked like for a second that horse was going to go away from me, but she came back and was fighting, so that was a good race for her going long the first time.”

Bred in Kentucky by Vincent Colbert, Chocolate Gelato was bought for $475,000 at the Fasig-Tipton Florida select sale in March, when she was consigned by SGV Thoroughbreds. She is out of the Candy Ride mare Special Treat and hails from the prominent matriarchal bloodlines of Get Lucky, Numbered Account and La Troienne.

Spendthrift Farm’s Major Dude sprung a mild upset on Sunday at Aqueduct Racetrack in the Grade 2, $200,000 Pilgrim for 2-year-olds at 1 1/16 miles on turf, gamely holding off odds-on favorite I’m Very Busy to give Pletcher and Ortiz their second consecutive graded-stakes win on the card.

In addition to taking home the winner’s share of the purse of $110,000, which bumped his bankroll to $165,250, Major Dude also received an expenses-paid trip to the Breeders’ Cup Juvenile Turf. The Pilgrim was a designated ‘win and you’re in’ event for the Nov. 4 race at Keeneland.

Making his turf debut in the Pilgrim, Major Dude had previously raced three times on dirt and failed to distinguish himself on the surface. The $550,000 yearling purchase by Bolt d’Oro won his debut going five furlongs on June 18 at Monmouth Park before finishing sixth in the Sanford (G3) at Saratoga and third in the one-mile Sapling at Monmouth Park last out, topping out at a Beyer Speed Figure of 69, according to Daily Racing Form.

It’s another @BreedersCup #wayi success for @PletcherRacing who scoops the G2 Pilgrim and a spot in the #BC22 Juvenile Turf.

While the Pilgrim represented a question mark for his connections given the challenging conditions, it was evident as soon as the field left the gate that at the very least Major Dude’s early speed had transferred to the new surface. Movisitor broke sharply from outermost post 11 and then ceded the lead to Fly Right, who shot through on the rail into the clubhouse turn to take control. Major Dude sat just off those two in an ideal stalking position under Ortiz, the meet’s leading rider.

“You're always concerned when you're running on ground that you haven't been on before,” Pletcher said. “When we worked him on the turf, it was pretty firm ground, so we knew he liked that. We were hoping he'd like (softer ground) today. It seemed like he was always traveling really well.”

Fly Right, with Hall of Famer Javier Castellano in the irons, led the field through honest splits of 24.10 seconds for the opening quarter-mile, 49.73 seconds for the half, and 1:15.84 for three-quarters over the yielding outer turf course at Aqueduct. Movisitor sat just off his flank, and long shot Noble Huntsman raced in tandem with Major Dude. I’m Very Busy, meanwhile, broke slowly from post 9 under Flavien Prat and found himself near the back of the pack in the nascent stages of the race.

I'm Very Busy picked things up around the far turn while racing four wide as Major Dude slipped through on the inside into the stretch. With full momentum on the outside, it appeared as though I’m Very Busy was destined to win easily, however Major Dude dug in gamely over the rain-soaked course and battled back to prevail by a length. He completed the distance in 1:46.60 and returned $22.40 on a $2 win wager as the 10-1 fourth choice in the wagering.

The Chad Brown-trained I’m Very Busy, owned in partnership by Team Hanley, Richard Schermerhorn, and Paul Braverman, had to settle for second after a less-than-ideal trip. He still finished 1 1/2 lengths ahead of Lachaise in third, who was followed by Noble Huntsman in fourth.

Following a strong display in her graded stakes debut, Coastana will pursue a meaningful win against quality company in Sunday’s 19th running of the Waya (G3).

Coastana, owned by Belladonna Racing and trained by Cherie DeVaux, enters the 1 3/8-mile turf marathon for fillies and mares 3-year-olds and up off an even third in the Flower Bowl (G2) on Sept. 3 at Saratoga, where she completed the trifecta at 33-1 odds.

The 5-year-old dark bay daughter of Kitten’s Joy tracked a close second to a leisurely pace set by upset winner Virginia Joy and had dead aim on the leader around the far turn but flattened out in deep stretch while being passed by War Like Goddess to be defeated 1 1/2 lengths.

She secured a victory in her following start when stretching out to the Waya distance in a Saratoga inner turf allowance last summer.

Bred in Kentucky by Ken and Sarah Ramsey, Coastana is out of the Pulpit mare Reachfortheheavens, making her a full sister to dual Grade 1-winning millionaire Real Solution.