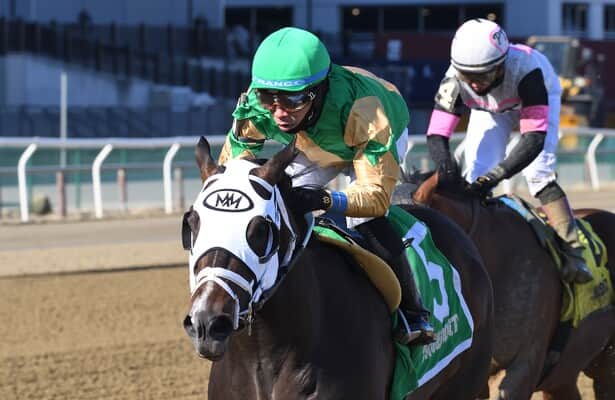 Trainer Mike Maker told Horse Racing Nation that, with the victory, Rotknee would be pointed next to the $200,000 Animal Kingdom Stakes, a six-furlong race April 2 on the synthetic track at Turfway Park.

The son of Runhappy broke alertly under Manny Franco from the outermost post 5, marking off splits of 23.37 seconds for the quarter-mile and 46.69 for the half-mile over the fast main track.

The Dylan Davis-piloted Agility tracked in second and began to make his run for the lead entering the turn with Best Idea and Mister Larry farther back in a battle for third.

Rotknee remained in command at the top of the lane with a right-handed tap of the crop from Franco, digging in at the eighth pole as Agility attempted to close the three-length gap. Rotknee was kept to task to retain his advantage, crossing the wire a 2 3/4-length winner in a final time of 1:27.06.

Agility finished in second, 5 3/4 lengths ahead of late-running G Munning, who was ahead in the photo for show over post-time favorite Best Idea. Mister Larry completed the order of finish.

“That was the plan. I didn’t want to change anything with him,” said Franco, who has been aboard Rotknee for two of his three consecutive wins. “I rode him last time, and I went to the lead, and he kept going. So going seven-eighths today I expected to be on the lead, too. I let him break out of there, got the lead, and he did the rest.”

Davis said the Jorge Abreu-trained Agility was green down the lane.

“I was happy with my position, he was just lugging in with me down the stretch. I thought he got in his own way. He stayed on his left lead the whole time,” said Davis, who rode the Practical Joke colt for the first time. “I talked to Titi (Abreu), and we’re going to change the bit on him and maybe stretch him out a little more. I thought if he was able to be straight and switch his leads properly and maintain a straight course, he would have won this race, for sure.”

Rotknee’s victory came on the heels of a six-furlong, optional-claiming victory Feb. 11 against fellow state-breds at the Big A in the same fashion, leading at every point of call to land a comeback win after six months away from the races. The dark bay colt broke his maiden at second asking under Jose Ortiz in August at Saratoga and now boasts a perfect in-the-money record of 4: 3-1-0.

“What was not to like? I heard from Mike we were looking to do what we did,” said Butler. “The fact that he had no company (on the front end), I was thrilled. We hadn’t done the seven furlongs before, so that gave me a little trepidation coming down, but he pulled out all stops.”

Out of the Speightstown mare In Spite of Mama, Rotknee is a third-generation runner for Butler, who bred and campaigned both his dam and grand dam.

“His (grand) dam Mama Theresa, I raced with Dominic Galluscio here for a couple of years. She’s the base that we’ve put this all together from,” said Butler, who named the colt after his college nickname. “For a guy that’s learning the ropes here, she’s been very good to me.”

Bred in New York by Butler, Rotknee collected $55,000 for his winning effort, boosting his total purse earnings to $156,350.