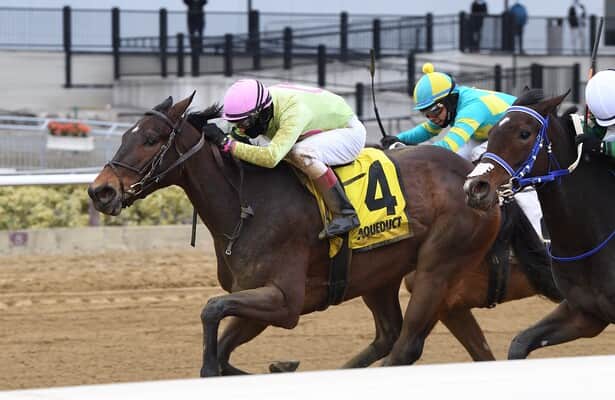 Michael Dubb’s Battle Bling was a last-to-first winner of Sunday’s $100,000 Ladies Stakes for fillies and mares, 4-years-old and up, going nine furlongs over the fast main track at Aqueduct.

Battle Bling made her first start for trainer Rob Atras in the Ladies after being claimed for $62,500 out of a game second at 10-1 in an optional claimer on Dec. 19 at the Big A, defeated a neck by next-out stakes winner Maiden Beauty.

“When we claimed her, I was just happy she ran so well that day because she was longer odds,” Atras said. “Mike Dubb picked her out, and I liked her, but it was a great claim. We nominated, and it looked like we had a shot with the short field. The weather has been tedious lately, and training has been interrupted, but she’s a nice filly. I’ve liked her since day 1. I’m glad Mike decided to claim her.”

Breaking from post 4 in the Ladies, Battle Bling emerged well under Trevor McCarthy while the Gary Sciacca-trained Exotic West stumbled at the start from post 1 and unseated rider Dylan Davis. Exotic West ran riderless behind the field before the outrider collared her and safely escorted her off the track while Davis sprung quickly to his feet.

#4 Battle Bling goes 4 wide and wins by a head in the Ladies Stakes at #Aqueduct.

Long shot Vienna Code was unbothered by the commotion to her inside and bounded away to take the lead in the first turn from Its Cold in Dehere while Battle Bling was shuffled back to last of five under Trevor McCarthy through an opening quarter-mile in 24.97 seconds.

With no change to the running order through a half-mile in 50.91, McCarthy began to get to work on the 4-year-old daughter of Vancouver, closing in on her rivals as the field passed the three-quarter marker and made their way into the final turn.

As Its Cold in Dehere faded from second approaching the top of the stretch, post-time favorite Miss Leslie and Battle Bling both made their run at the lead. Vienna Code continued to dig in along the rail and battle with Miss Leslie to her outside as Battle Bling took command in the center of the racetrack.

With a sixteenth to the finish, McCarthy gave Battle Bling a strong ride with right-handed encouragement as Miss Leslie continued to gain ground on her inside with late-running Kiss the Girl looming to her outside.

Battle Bling had something left in the tank and fought on gamely to hold off Miss Leslie by a neck with Kiss the Girl a half-length back in third. The final time for the nine furlongs was 1:57.11.

“On paper it set up so beautifully,” McCarthy said. “I was able to follow (Miss Leslie), get the jump on her at the quarter pole and fight them off. The track is a little tiring. We had some nice cover, and we were able to get her going, open up a few lengths and make those guys really earn it.

“My filly is a big, long-striding filly,” McCarthy added. “She doesn’t have much punch, but when she does you got to get her rolling, and she’ll keep on going.”

Atras praised McCarthy’s ability to adapt his ride to the slower pace.

“He sent and then noticed there was a little bit of speed and dropped back. They were going moderate – not slow but not too fast,” Atras said. “He made a real bold move in the turn, and I thought that was a great move that he made. Trevor is a strong rider, and she held on.”

Angel Cruz, the regular rider of runner-up Miss Leslie, was proud of the 4-year-old Paynter filly’s effort after entering the Ladies on a three-race win streak.

“My filly kept fighting and tried her best,” said Cruz, “At the top of the stretch she came back with a fight. Trevor’s horse came with a big kick. The longer she goes, the better she does. She’s a better filly going long.”

Completing the order of finish were Vienna Code and Its Cold in Dehere.

A general steward’s inquiry was conducted to review the start of the race regarding Exotic West, resulting in no change to the order of finish.

Bred in Kentucky by Royal Oak Farm and E. Kiely, Battle Bling’s win in the Ladies was the first stakes victory of her career, taking home $55,000 to increase her total purse earnings to $203,867 and improve her record to 13: 3-4-1. 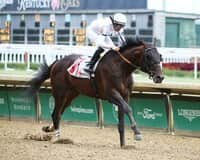