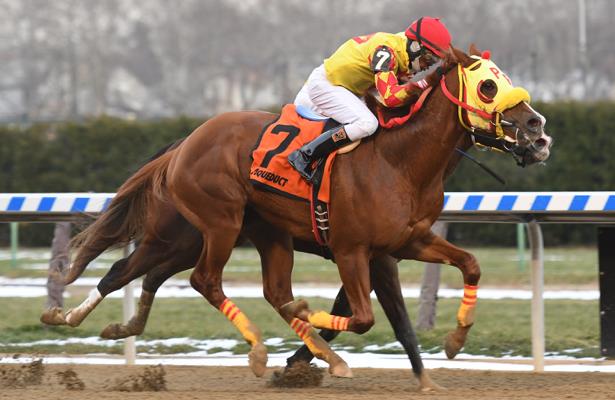 Ryan Racing's Aqua Bel Sar capitalized on being part of the pace scenario, surging to the front at the half-mile mark and outkicking Belleville Spring in deep stretch to capture the 33rd running of the $150,000 Great White Way for juveniles on Sunday at Aqueduct Racetrack.

Off at 37-1 and the second-longest odds in the seven-horse field, Aqua Bel Sar broke well under jockey Trevor Simpson and stalked Dezzer's early speed of a quarter-mile in 22.50 seconds. Simpson then moved the Trinniberg colt to the front, where he took command by 2 ½ lengths over post-time favorite Stoney Bennett, with the half-mile going in 46.65.

Out of the turn, the Bisnath Parboo trainee dug in and fended off Belleville Spring's challenge from the inside to win by a neck.

"He was due to win. And more than win," said Parboo, who also trained Trinniberg, the 2012 Eclipse Award-winning sprinter. "His father was a champion stallion [and] an Eclipse Award winner. I want to go to Dubai and this horse is going to take me there.

"[This] horse was green [first time out]. I couldn't expect less from him. This was only a small part of him. He has to go up to the top. You talk about pedigree, I think he has that."

Aqua Bel Sar, who ran fourth in his debut on December 1 at the Big A, completed six furlongs in 1:13.43 in a maiden-breaking effort to win the Great White Way, part of the New York Stallion Series. "This horse is a very nice horse and had been training good in the morning and I knew he'd run a good race today," Simpson said. "The trainer said the best thing to do is a get a good break from the gate and then he can take it from there. He finished hard; he's a fighter."

Aqua Bel Sar paid $77 on a $2 win wager and upped his career earnings to $92,750. It was the second consecutive day a longshot came in for a NYSS race, with Aunt Babe winning at 39-1 on Saturday in the Fifth Avenue.

"We are going to see how he comes back. But, most likely, he will run the races his father ran at Aqueduct," Parboo said. "We will aim for the seven-furlong sprint race in April [Grade 3 Bay Shore]. His father, Trinniberg, won it like nothing. I think he will win it too."